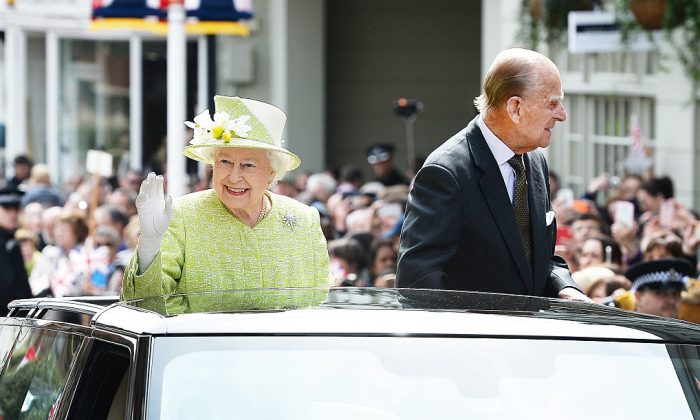 Britain's Queen Elizabeth II (L) and Prince Philip, Duke of Edinburgh wave to wellwishers during a 'walkabout' on her 90th birthday in Windsor, west of London, on April 21, 2016. (JOHN STILLWELL/AFP/Getty Images)
UK

Flood of Tributes for Queen Elizabeth on Her 90th Birthday

WINDSOR, England—Fate unexpectedly made her queen. Duty and endurance have made her an institution and an icon.

Queen Elizabeth II turned 90 on Thursday as Britain’s oldest and longest-reigning monarch, drawing crowds of well-wishers and floods of tributes to the stamina and service of a woman who can claim to have given her name to the age.

The queen usually spends her birthday privately, with most of the pomp and ceremony reserved for an official birthday that’s marked in June. But Thursday’s milestone brought an outpouring of public goodwill.

Thousands of fans greeted the queen on a tightly choreographed walkabout near her Windsor Castle home, while elsewhere her government and subjects held gun salutes, fireworks and speeches in Parliament, and televised retrospectives offered scenes from a royal life that has stretched from the Roaring ’20s to the Internet age.

“Her Majesty has been steadfast — a rock of strength for our nation, for our Commonwealth and on many occasions for the whole world,” Cameron said as he led tributes in the House of Commons.

He praised the monarch’s “unshakable sense of duty,” pointing out that she had provided counsel to 12 British prime ministers and met a quarter of all the U.S. presidents since Independence.

Her record is all the more remarkable because she was not born to be queen. When Princess Elizabeth was born on April 21, 1926, her father was a younger son of king and not expected to reign. His older brother took the throne in 1936 as Edward VIII — but abdicated the same year to marry his divorced American lover, Wallis Simpson.

Elizabeth’s father became King George VI and, at 10, she became heir to the throne. When she was 21 — almost five years before she became queen — she promised the people of Britain and the Commonwealth that “my whole life, whether it be long or short, shall be devoted to your service.”

She kept the promise, and it has struck a chord with people in Britain and around the world.

“She’s such an icon and a real role model for the children of today. And I think everybody should respect her for all the years that she’s given for her country,” said Donna Werner, an American tourist from New Fairfield, Connecticut, who came to greet the queen in Windsor, just west of London.

By her side was 94-year-old Prince Philip, her husband of 69 years, with whom she has four children, eight grandchildren and five great-grandchildren

Elsewhere, artillery companies fired gun salutes from sites including Hyde Park and the Tower of London, the bells of Westminster Abbey rang out in celebration and the Parliament building was being lit in the red, white and blue of the Union Jack.

There was even a tea party aboard Royal Navy flagship HMS Ocean, whose crew stood in formation to spell out “EIIR 90” — Elizabeth II Regina, her official monogram — on the flight deck.

In the evening, the queen was lighting the first in a chain of 1,000 commemorative beacons to blaze across Britain and around the world, before attending a private family party at the castle.

The BBC is showing a documentary that includes rare home-movie footage of the queen as a child in the 1930s and a young mother in the 1950s. In the documentary, Prince Charles watches a clip of the moment a man fired blanks while the queen was riding by in 1981, startling her horse. The prince notes that his mother is “made of strong stuff.”

The 67-year-old heir to the throne also recorded a tribute to his mother for broadcast on the BBC World Service. He recited a passage from William Shakespeare’s “Henry VIII” about the birth of the monarch’s predecessor, Queen Elizabeth I:

“She shall be, to the happiness of England,

An aged princess; many days shall see her,

And yet no day without a deed to crown it.”

The passage was apt. The first Elizabeth reigned for decades and brought stability to a fractured nation. Elizabeth II has also become a reassuring presence at home and an emblem of Britain abroad— it’s no surprise she appeared at the opening of the 2012 London Olympics alongside another icon, James Bond.

She has weathered tough years when the divorces of three of her children tarnished the monarchy. And she came back from the death of Princess Diana in a 1997 car crash, when the royal family was criticized as being out of touch with the public’s grief.

Her popular grandchildren have helped bolster the family fortunes. Prince William’s wedding to Kate Middleton in 2011 was a 21st-century mashup of traditional monarchy and modern celebrity that brought widespread popular celebration. Their two children — Prince George, who is almost 3, and 11-month-old Princess Charlotte — are likely the world’s most famous toddlers.

The world’s media loves bachelor ex-soldier Prince Harry, who, like his brother, has thrown his weight behind numerous charities.

The queen will receive more birthday greetings on Friday, when she hosts U.S. President Barack Obama and his wife Michelle Obama for lunch at Windsor Castle.

And there is more (much more) to come.

For four nights next month there will be a musical pageant in Windsor, involving 900 horses and some 1,500 actors, dancers and musicians, celebrating the queen’s nine decades.

On June 11 comes the monarch’s “official” birthday, traditionally marked by the Trooping the Color military parade. This year there will also be a service at St. Paul’s Cathedral and a huge street party in the Mall outside Buckingham Palace for members of charities the queen supports. The government has even given pubs permission to stay open later on June 10 and 11, until 1 a.m. instead of the standard 11 p.m.

Not everyone in Britain has succumbed to royal-mania. The anti-monarchist group Republic published a resolutely undeferential message headed “Happy Birthday Mrs. Windsor.”

“A long life is no reason for a long reign,” it said.