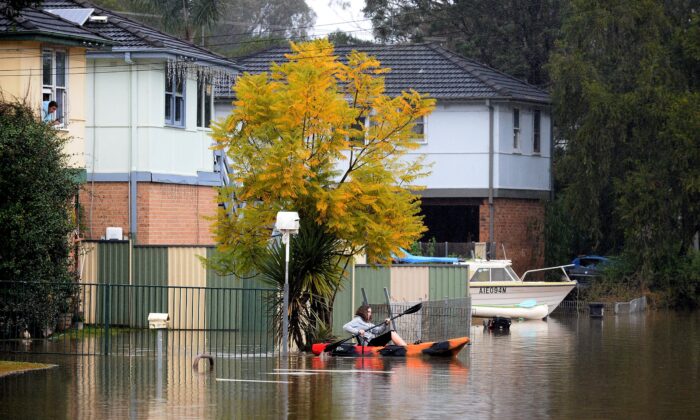 A resident paddles a kayak to commute in the Sydney, Australia, on July 6, 2022. - Thousands of Australians were ordered to evacuate their homes in Sydney as torrential rain battered the country's largest city and floodwaters inundated its outskirts. (Muhammad Farooq/AFP via Getty Images)
Australia

Australian insurers are bracing for a surge of flood insurance claims as heavy rains and flooding begin to recede in parts of New South Wales (NSW).

According to the Insurance Council of Australia’s latest data, NSW residents have so far lodged 8,415 claims, an increase of around 28 percent compared to figure released on July 7.

Around 84 percent of the claims were for property, while 14 percent were for motor and the remaining two percent for commercial.

The council said the estimated flood damage bill could be around $97.9 million (US$66.88 million) and called on policyholders whose properties, businesses, or vehicles had been damaged to file claims as soon as possible.

The new wave of claims comes just months after similar devastating floods swept through Queensland and NSW in late February and early March.

The Council said the flood crisis was the country’s third-most costliest extreme weather event causing an estimated $4.8 billion in damage (US$3.27 billion).

Insurers have received nearly 225,000 insurance claims in both states, with almost 30 percent of the claims closed.

So far, insurance companies have paid $1.5 billion to policyholders, with insurance costs also rising 12 percent in June due to increasing material and labour costs.

“The sheer scale of the extreme weather event that devastated Queensland and New South Wales is something we have never seen before, and the cost continues to rise,” said Andrew Hall, the CEO of the Insurance Council of Australia, in a statement.

“Insurers are working hard to resolve claims as quickly as possible and have put on hundreds of extra staff to support claims processing as delays not only impact the policyholder. In most cases, they also add costs to the insurer.”

Meanwhile, thousands of NSW residents are breathing a sigh of relief as rains begin slowing. However, authorities warned of threats of flooding and landslips.

Around 40,000 people were under evacuation orders, with state NSW authorities now considering lifting these orders to allow communities to return home.

“The flood waters may be receding in some areas, but we know there are other regions that are still at the emergency stage, where the focus will be on keeping our communities safe,” federal Emergency Management Minister Murray Watt said.

At the same time, the NSW state government has extended financial relief to six additional flood-affected communities, with the total number of disaster-declared areas reaching 29.