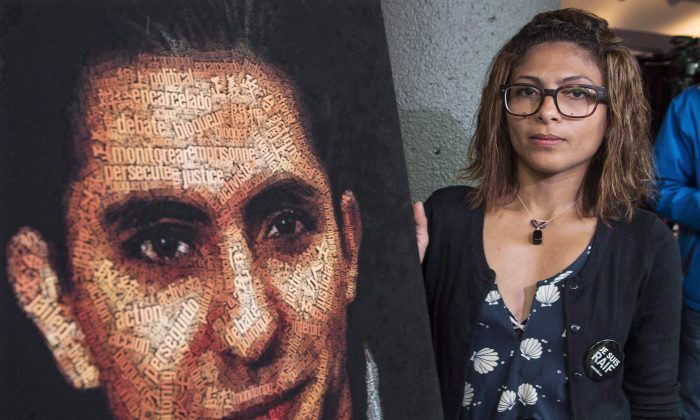 Ensaf Haidar stands next to a poster of a book of articles written by imprisoned Saudi blogger Raif Badawi on June 16 in Montreal. Haidar believes her husband’s flogging sentence is expected to resume soon and is imploring the incoming Canadian government to help him come to Canada. (The Canadian Press/Paul Chiasson)
Canada

MONTREAL—The wife of imprisoned Saudi blogger Raif Badawi believes his flogging sentence is expected to resume soon and is imploring the incoming Canadian government to help her husband come to Canada.

A source she trusts has told her the lashes are set to resume, without specifying exactly when, Ensaf Haidar said in an interview from her home in Sherbrooke, Que., on Oct 28.

Badawi was sentenced to 10 years in prison and 1,000 lashes for criticizing Saudi Arabian clerics on his website. He is also facing a hefty fine. The flogging has been suspended since an initial 50 lashes in January due apparently to health concerns and undisclosed reasons.

In a blog item posted this week to the Raif Badawi Foundation website, Haidar wrote that a Saudi source said the flogging will be administered inside the prison, adding the same source had warned her about the first 50 lashes before they took place on Jan. 9, 2015.

Haidar is imploring Prime minister-designate Justin Trudeau to take up her husband’s case. Trudeau has previously voiced his support.

“I would like him to help, yes,” she said, adding what she’d like is Canada to send Badawi a passport.

Outgoing Prime Minister Stephen Harper has also spoken out against Badawi’s treatment. But he said Ottawa’s influence was limited. While Badawi is not a Canadian citizen, his wife and children have lived in Quebec’s Eastern Townships region since 2013.

Haidar repeated her wish to have the Saudi king pardon her husband and deport him to Canada to be reunited with his family.

Badawi’s detention and sentence have stirred up worldwide condemnation and Haidar has travelled extensively pushing for his release.

Canada has called for clemency in the Badawi case and Quebec lawmakers unanimously adopted a motion in February calling for his immediate release, vowing to expedite his immigration case should he make it here.