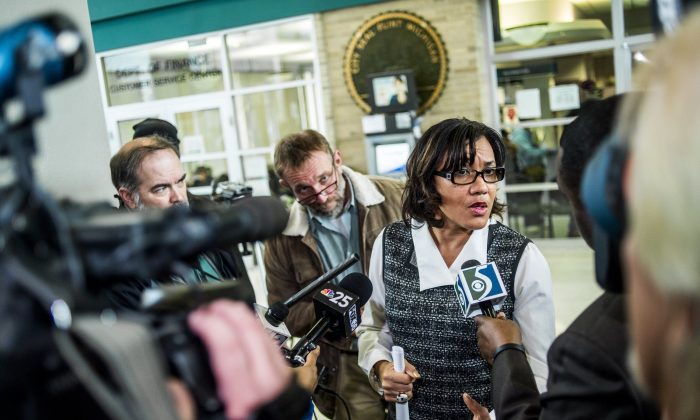 A swarm of reporters surround Flint Mayor Karen Weaver to ask question after a news conference on Tuesday Dec. 15, 2015, at City Hall in Flint, Mich. Flint's mayor declared a state of emergency due to problems with the city's water system caused by using water from the Flint River, saying the city needs more federal help. (Jake May /The Flint Journal-MLive.com via AP) LOCAL TELEVISION OUT; LOCAL INTERNET OUT; MANDATORY CREDIT
US

FLINT, Mich.  — Flint’s mayor has declared a state of emergency due to problems with the city’s water system caused by using water from the Flint River, saying the city needs more federal help.

Karen Weaver announced the declaration Monday night and said the move intends to help raise awareness of continuing problems. She said damage to children caused by lead exposure is irreversible and the city will need to spend more on special education and mental health services as a result.

“I am requesting that all things be done necessary to address this state of emergency declaration, effective immediately,” Weaver told the City Council.

Exposure to lead can cause behavior problems and learning disabilities in young children.

Flint switched from Detroit’s water system last year to Flint River water in a cost-cutting move while understate emergency financial management. The Flint River was supposed to be an interim source until the city could join a new system getting water from Lake Huron.

But residents complained about the taste, smell and appearance of the water. Officials maintained the water met safety standards, but children were found to have elevated levels of lead in their blood and it was determined that corrosive river water was drawing lead from aging pipes.

Weaver was elected in November, unseating the incumbent mayor who led the city during the public health emergency and blamed state and federal agencies for the water problems. Weaver had promised while campaigning to issue an emergency declaration.

City Council members were divided about what the declaration will mean, The Flint Journal reported. Councilman Scott Kincaid said it’s needed to seek more aid, noting, “We have to prove … that we need resources.”

County commissioners will consider Weaver’s declaration at a Jan. 4 meeting. She needs approval from county and state officials before possibly getting aid from the federal government.

Flint Councilman Josh Freeman said he doesn’t want residents to expect immediate help with the city’s water infrastructure, including lead service lines, because of the declaration. He said it doesn’t fix the problem.

“We need to find a way to actually fix the problem,” Freeman said.