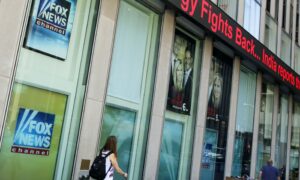 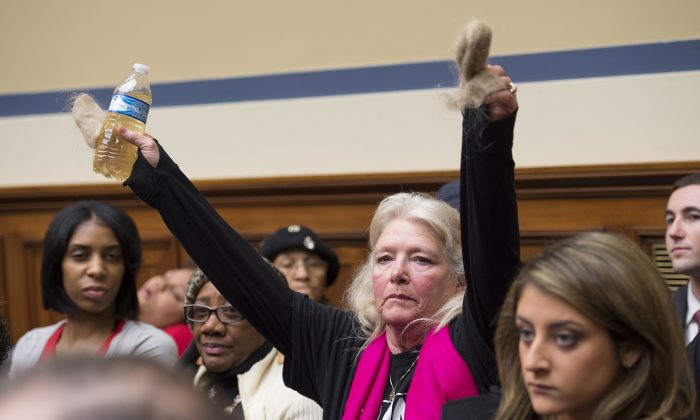 Flint, Mich. resident Glaydes Williamson holds up water from Flint and hair pulled from her drain, during the House Oversight and Government Reform Committee hearing to examine the ongoing situation in Flint, Mich., on Capitol Hill in Washington, D.C., on Feb. 3, 2016. Michigan should have required the city of Flint to treat its water for corrosion-causing elements after elevated lead levels were first discovered in the city's water a year ago, the state's top environmental regulator says in testimony prepared for congressional hearing. (AP Photo/Molly Riley)
US

WASHINGTON—Government officials tangled on Wednesday over who was to blame for the crisis in Flint, Michigan, that allowed lead-contaminated water to flow to thousands of residents at a combative congressional hearing that devolved into a partisan fight over witnesses and no-shows.

“A failure of epic proportions,” said Rep. Jason Chaffetz (R-Utah), chairman of the House Oversight and Government Reform Committee at the first Capitol Hill hearing since the crisis in Flint emerged last year.

“What happened in Flint was avoidable and never should have happened,” Beauvais told the House panel.

What happened in Flint was avoidable and never should have happened.
— Joel Beauvais, acting water chief, U.S. Environmental Protection Agency

Countering the federal official, Keith Creagh, director of the Michigan Department of Environmental Quality, acknowledged that the state should have required Flint to treat its water, but said the EPA “did not display the sense of urgency that the situation demanded,” allowing the problem to fester for months.

Creagh apologized for the state’s role in the water crisis, but said, “in retrospect, government at all levels should have done more.”

Flint is under a public health emergency after its drinking water became tainted when the city switched from the Detroit system and began drawing from the Flint River in April 2014 to save money. The city was under state management at the time.

Water was not properly treated to keep lead from pipes from leaching into the supply. Some children’s blood has tested positive for lead, a potent neurotoxin linked to learning disabilities, lower IQ and behavioral problems.

In the Senate, Democrats are pressing for money for Flint and threatened to block a bipartisan energy bill if the city doesn’t get some relief.

“We are serious, and if they want a bill we want to help the people of Flint,” said Sen. Debbie Stabenow (D-Mich.), sponsor of a package of aid that Democrats hope to add to the energy bill.

Democrats had proposed a $600 million package, but Stabenow said they had a agreed to less than half of what they had originally asked for. But Sen. John Cornyn of Texas, the second-ranking Republican, said it “seems a little premature to write a multi-hundred million dollar blank check when the state hasn’t even assessed their needs,” and is already getting funds from the state and the Obama administration.

While lawmakers and officials traded charges at the four-hour House hearing, much of the attention was on three people who weren’t there.

Frustrated Democrats complained that the GOP-led committee did not ask Michigan’s Republican governor, Rick Snyder, to explain to Congress what happened. Chaffetz, the panel’s chairman, lamented the absence of Darnell Earley, a former state-appointed emergency manager who ran Flint when its water source was switched. Earley declined a request to testify.

Chaffetz vowed to “hunt down” Earley, although his lawyer said it was impossible for Earley to appear at the hearing and suggested a different date.

Chaffetz also said he would issue a subpoena to Susan Hedman, the EPA’s former Midwest region chief who resigned amid criticism of her handling of the water crisis. Chaffetz said the committee will interview Hedman under oath this month.

Snyder has apologized repeatedly for the state’s role in the crisis. Snyder and state legislators have enacted $37 million in emergency Flint funding for the current fiscal year. Snyder is expected to propose an additional $30 million in state funding to help Flint residents pay their water bills.

The crisis has taken on partisan overtones, as Democrats blame the Republican governor and some Republicans target the EPA for failing to intervene sooner.

Chaffetz and other Republicans said EPA should have acted on its own to warn the public about water problems in Flint.

Democrats were equally adamant that the state was to blame.

Rep. Matt Cartwright (D-Pa.) accused of Snyder of “hiding” by failing to appear at the hearing.

Despite the partisan bickering, the hearing “got stuff accomplished,” said LeeAnne Walters, a Flint parent and activist who helped bring public attention to the city’s water crisis more than a year ago.

“I think we were heard, that’s the main thing,” said Walters, a member of the group Water You Fighting For.

Walters said that the focus of some lawmakers on state officials and others on the federal government “works for the people because they are both accountable.”