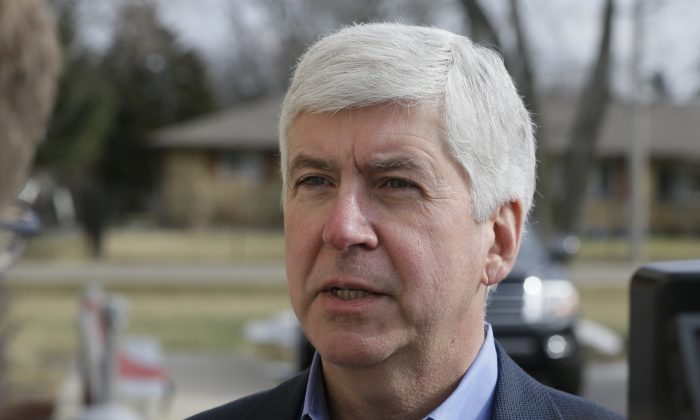 Michigan Gov. Rick Snyder is interviewed after visited a church that's distributing water and filters to its predominantly Latino parishioners in Flint, Mich., on Feb. 5, 2016. (AP Photo/Carlos Osorio)
US

LANSING, Mich.—Rick Snyder’s standing as one of the GOP’s most accomplished governors has taken a beating in the crisis over lead-contaminated water in Flint, Michigan. Democrats, especially those running for president, have pointed to his administration’s mishandling of the city’s switch to a cheaper water supply as an example of Republican cost-cutting run amok.

But in a twist, the national scorn could pay one political dividend for him inside the state. The uproar should lessen resistance within his own party to the largest remaining item in Snyder’s plan for revitalizing Michigan’s economy: rescuing the worst-in-the-nation public schools in Detroit.

Snyder’s oft-stated goal since his election in 2010 has been reversing the state’s economic slide that worsened during the U.S. auto industry’s downturn. His successful effort to push financially devastated Detroit through bankruptcy was a key step in his plan.

But until the Flint disaster erupted, the GOP-controlled Legislature was balking at also pumping much more money into fixing the schools, despite the governor’s insistence that functioning Detroit schools are essential to giving Michigan a metropolitan economic hub again. Snyder’s bailout of the city cost $195 million in state money. The school rescue would cost $720 million more.

“In a bizarre kind of way, it’s conceivable this might work to his advantage,” said former GOP lawmaker Bill Ballenger, a long-time political analyst. He noted that Snyder made both helping Flint and Detroit major themes in his annual budget address this week, and legislators could worry “they’re going to start getting tarred with the same brush that Snyder is if they don’t do anything.”

Snyder, a former corporate CEO who ran for office as a turnaround specialist, has been juggling the complicated politics of a state split between white, more affluent and conservative residents and poorer black residents in the industrial cities. As Snyder has pursued his urban rescue plans, some Republicans have complained about throwing good money after bad.

The finances of Detroit Public Schools, with a projected $515 million debt load, have become so dire that the system — which has been under state financial management for almost seven years — appears in danger of starting to run out of money in April.

Snyder initially proposed that other schools forgo $50 per student in state funding annually to come up with the bailout money, but it was rejected outright by the Legislature. In the newly changed political environment, however, lawmakers appear open to diverting money from the state’s settlement with tobacco companies, which is used for general spending and economic development.

Getting beyond Detroit’s financial woes cannot be avoided, said Republican Rep. Al Pscholka, chairman of the House Appropriations Committee. “All of us agree that the financial piece must be taken care of and probably pretty quickly,” he said.

Snyder and lawmakers are negotiating a way of providing state oversight to ensure that the school system stays solvent but is run by a locally elected school board.

Like with the 2014 aid package for the city of Detroit, Snyder is warning legislators that bailing out the state’s largest school district would be cheaper now than later.

However, Snyder and legislators say they are also concerned about how to improve the district’s academic quality. “We have to do something. What that something is is the big question right now,” said Republican Rep. Tom Hooker.

But Hooker said a bailout would not be approved merely to provide Snyder with a legislative “win” after the Flint debacle.

Democratic presidential candidates Hillary Clinton and Bernie Sanders have both condemned Snyder’s handling of the crisis.

Lawmakers have committed $37 million — with another $195 million on the table — to help Flint deal with the lead contamination of its water supply, which occurred when the city switched to local river water without applying chemicals that would prevent corrosion of lead pipes. The state Department of Environmental Quality has acknowledged instructing Flint, which was run by a state-appointed financial manager at the time, not to use corrosion chemicals based on a misreading of federal regulations.

The cost to aid impoverished Flint and Detroit could continue for years, in part funded by the state’s budget surplus.

Republican Sen. Mike Kowall said he wants to avoid “just throwing good money after bad” but people also “just want to get something done. … We have another opportunity to clean this problem up, too.”