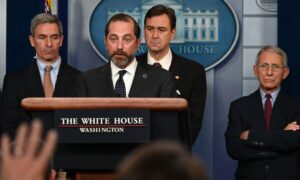 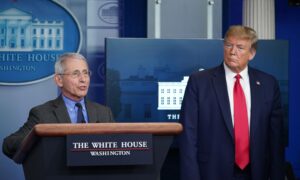 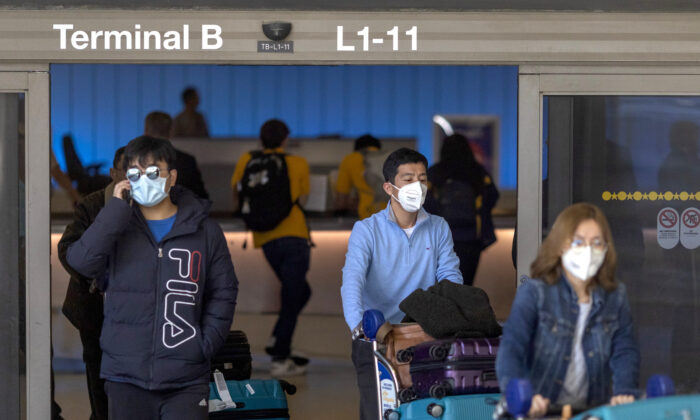 Air travel from China to the United States dropped 86 percent in February after President Donald Trump banned most trips due to the emerging COVID-19 pandemic, according to newly released statistics.

Trump on Jan. 31 issued an executive order barring people who had been in China within the past two weeks from entering the United States. The order went into effect on February 2.

“We can’t have thousands of people coming in who have this problem, the coronavirus,” Trump said at the time during a pre-Super Bowl interview with Fox News’ Sean Hannity.

Air passenger journeys from China decreased from 505,560 in January to 70,072 in February, Dr. Anne Schuchat, part of the Centers for Disease Control and Prevention (CDC) COVID-19 response team, said in a May 1 report.

But travelers kept pouring in from Italy and other Schengen Area countries. Nearly 1.75 million from the nations, including 139,305 from Italy, arrived in February.

The CCP (Chinese Communist Party) virus, or SARS-CoV-2, a novel coronavirus from China that causes the COVID-19 disease, was spreading rapidly through Western Europe that month.

Trump on March 11 announced a travel ban on most Schengen counties, asserting the European Union “failed to take the same precautions” as the United States to restrict travel from China and other virus hotspots.

“As a result, a large number of new clusters in the United States were seeded by travelers from Europe,” he said.

The ban was extended to Britain and Ireland on March 14.

The number of travelers flying to the United States from Italy and all Schengen countries decreased 74 percent and 50 percent, respectively, in March, according to the new CDC report.

Genomic analysis of different strains of the CCP virus in America indicates multiple introductions from international travelers from China and Europe as well as domestic travel.

Returning cruise ship passengers also contributed to the rapid increase in cases, Schuchat said. The number of cases in the country increased more than 1,000-fold in a three-week period from late February to early March.

“Persons from many countries are in close contact on cruises, and crew members continue to work on ships for multiple voyages. As a result, passengers returning from cruises contributed to the early acceleration phase,” she wrote.

CDC Director Robert Redfield on March 14 ordered a No Sail Order for cruise ships and renewed the order on April 9, bringing new cruise trips to a halt.

Large events in February, including Mardi Gras in Louisiana, the international Biogen conference in Boston, Mass., and a funeral with more than 100 attendees in Albany, Ga., “led to further spread” of the virus, the new report said. Clusters also broke out in skilled nursing and long-term care facilities and at hospitals, along with some workplaces like meatpacking plants. Other clusters were linked to houses of worship.

A major factor in the rapid spread of the virus was the significant percentage of patients who showed no symptoms. Another factor: the introduction of the virus into the country happened during the annual flu season, making it difficult to discern some CCP virus cases from influenza. The illnesses share some symptoms, like fever, cough, and shortness of breath.

“As the pandemic evolves, control efforts must be continuously refined. Certain interventions that were critical in the early stages, such as quarantine and airport screening, might have less impact when transmission is widespread in the community. However, many elements of the mitigation strategies used during the acceleration phase will still be needed in later stages of the outbreak,” the doctor concluded.

Preliminary results from antibody testing suggests that even in the U.S. regions with the largest numbers of recognized cases, most persons have not been infected and remain susceptible, she said, adding, “Therefore, sustained and concerted efforts will be needed to prevent future spread of SARS-CoV-2 within the United States.”