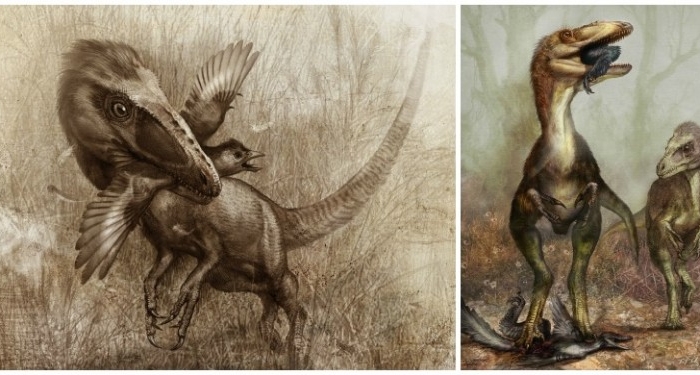 Sinocalliopteryx as a stealth hunter feeding on the dromaeosaur Sinornithosaurus (L), and the bird Confuciusornis (R). (Cheung Chungtat)
Science

Bones from small flying dinosaurs have been discovered in the stomach of Sinocalliopteryx gigas, a raptor-like bipedal dinosaur about the size of a wolf.

Two fossilized S. gigas skeletons were found in China by a Canadian palaeontology team working with a Chinese geologist.

Both the specimens had intact abdominal contents. One of the predators had eaten at least three small flying dinosaurs, while the other had eaten a cat-sized raptor called Sinornithosaurus that might have been able to fly.

“Sinocalliopteryx didn’t have wings or the physical tools needed to be an adept tree climber,” said study co-author Scott Persons at the University of Alberta in a press release.

This predatory dinosaur had feather-like structures, probably for insulation not flight, but some of its prey species could fly for at least short distances.

Since S. gigas couldn’t fly or climb trees, how did it manage to catch flying dinosaurs?

The researchers didn’t rule out scavenging, but thought it more likely that the predators hunted the smaller dinosaurs. One of the predators seemed to have eaten two small flying dinosaurs called Confuciusornis, one right after the other.

“The presence of two Confuciusornis in a grossly similar state of digestion suggests they were consumed in rapid succession,” the researchers wrote in their paper.

“If the Sinornithosaurus was predated upon (rather than scavenged), this would imply Sinocalliopteryx was capable of tackling carnivorous prey more than a third its own size.”

The scientists suggested that the predator might have used stealth, stalking its prey rather like cats stalk birds today.

Both of the S. gigas skeletons are “firsts:” the first evidence of multiple flying dinosaurs in a predator’s stomach, and the first time a raptor has been discovered in the stomach of another dinosaur.

The study was published in the journal PLoS ONE on Aug. 29, and can be accessed here.