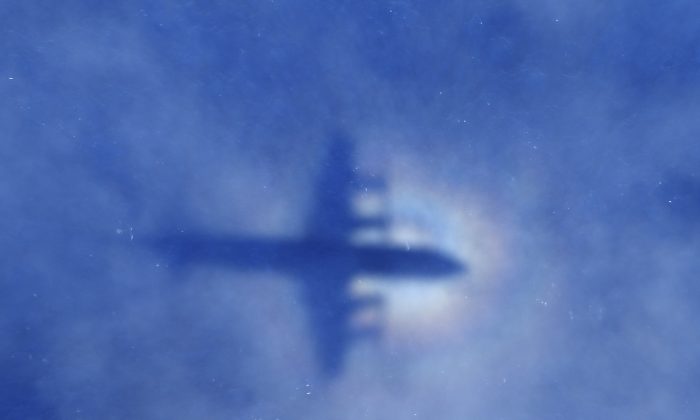 In this Monday, March 31, 2014 photo, a shadow of a Royal New Zealand Air Force P-3 Orion aircraft is seen on low cloud cover while it searches for missing Malaysia Airlines Flight MH370 in the southern Indian Ocean. Malaysia's national police chief has warned that the investigation into what happened to the plane may take a long time and may never determine the cause of the tragedy. Khalid Abu Bakar said Wednesday, April 2, that the criminal investigation is still focused on four areas — hijacking, sabotage and personal or psychologica problems of those on board the plane. (AP Photo/Rob Griffith, Pool)
By Jack Phillips

A viral Facebook post claims that Malaysia Airlines Flight MH 370, which went missing March 8, has been found in the Indian Ocean, but it’s just a scam trying to get people to a bogus video-sharing website. A few scams are claiming that the plane was discovered in the Bermuda Triangle.

According to The Associated Press, the plane hasn’t been found despite a massive, multi-country search effort in the Indian Ocean.

The image used in the post is from the 2013 Lion Air crash that took place in Bali. The flight has no connection to the Malaysia Airlines crash.

“The Facebook post is a callous and nasty scam designed simply to promote a dodgy video streaming website. Users who click the teaser image in the hope of seeing the crash footage will be taken to a bogus Facebook page that supposedly hosts the video. But, when they attempt to play the video, they are told via a popup notice that they must first share it on Facebook Via this mechanism, the scam post is seen by all of the user’s friends and will therefore gain more victims who will continue to spread it across the network,” reads a post from Hoax-Slayer about the scam.

Malaysian police investigators on Wednesday said that the mystery of the missing jet may never be solced.

Another Facebook scam reads: “Video of Malaysia MH370 Plane Found in Bermuda Triangle. Passengers alive!” It includes a photo from 2013 of a plane that crash-landed near Bali, Indonesia, and it claims there’s video footage.

The scam is an attempt to get users to fill out bogus surveys.

“The website will ask you to complete surveys and share the same website in order to view the video, but this is a trick to get you to complete the surveys that the cybercriminals behind this scam will get paid for or to spread this scam to your Facebook friends,” reads an alert from Online Threat Alerts last week. “Remember, there is no video, and this is a scam. If this post appears on your Facebook Wall/Timeline, please delete it and do not like, share or comment on it. Never share, like, take surveys in order to view video.”