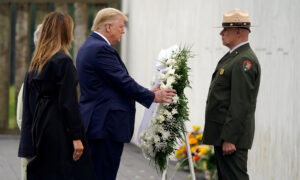 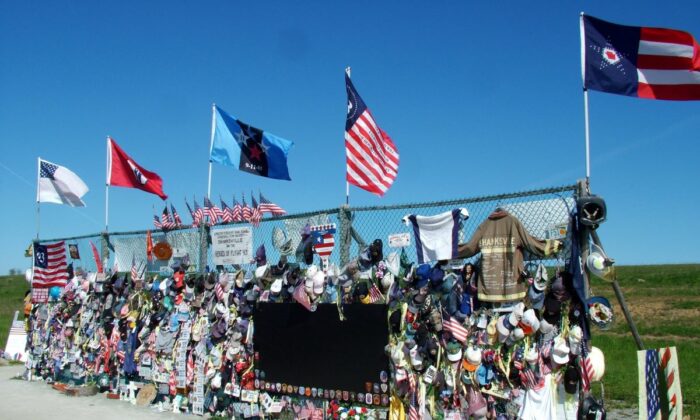 Before the Flight 93 National Memorial was built, busloads of people stopped at this fence near the crash site in Shanksville, Pennsylvania to grieve. (Chuck Wagner/"Reflections from the Temporary Memorial")
Regional News

The Flight 93 National Memorial near Shanksville, Pennsylvania, was once a coal strip mine.

On neighboring land, Camp Allegheny’s then-Executive Director Duane Slade recalls the mine used many charges of dynamite at once, creating loud booms as they crumbled the earth. But it was nothing compared to what he heard on Sept. 11, 2001, when Flight 93 crashed there.

“The explosion of that plane going in, was probably ten times louder than any dynamite I ever heard,” Slade told The Epoch Times in an interview. “I couldn’t see it, but I certainly heard it and felt it.”

The crash site was on the other side of a mountain ridge. Slade quickly drove over to check on his son’s house, which was an eighth of a mile from the crash site. He saw smoke, smoldering trees, and the first fire truck from Shanksville arrive.

“You couldn’t see a plane,” Slade said. “It was just a big hole in the ground. It was a crater. I went back to my office because there wasn’t anything I could do.”

That night he heard that first responders needed ice and drinking water; and the Salvation Army requested food for workers. Eventually, the need was for 300 meals each for breakfast, lunch, and dinner; and 100 meals at midnight for overnight workers handling site security.

Camp Allegheny was among those who helped feed and house workers. The camp also provided a stable for 16 horses of the mounted state police. Slade said eight horses worked at a time, with police patrolling the wooded areas around the crash site.

“We had some Red Cross and Salvation Army people stay at the camp,” Slade said. “The Chaplin from the National Guard who was operating the temporary morgue at the site, stayed in our home because he could not get any rest at the armory.”

“When I look back, we had phone call after phone call asking, ‘what can I do?’ They wanted to do something. We had people come into the kitchen and cook,” Slade said. “I don’t know if that same kind of attitude would happen today. Maybe it would. The people on that flight—they gave all, and a lot of people have an appreciation for that. It’s the kind of feeling that holds on to people and it inspires them to help when there is nothing else you can do.”

Camp Allegheny’s maintenance director Chuck Wagner had been helping ferry food back and forth from the crash site, but he had another skill that was needed. Wagner used to operate heavy equipment at the mine. Before volunteering to help excavate the debris field, he prayed for guidance because he wasn’t sure he would be able to handle the sights he would encounter.

Using trackhoe excavators, workers dug into the crater to recover what they could. They spread dirt out on the ground and investigators went through the dirt using garden tools to pick out items. It was a crime scene and the work was meticulous.

“The things I saw and the people I met, it made me feel helpful and purposeful,” Wagner told The Epoch Times in an interview. “I was blessed to have been there.”

They separated human remains, personal effects, and parts of the plane. Some 3,000 pounds of U.S. mail had been onboard. The diggers collected what they could find and returned it to the postal service. There were pieces of plane and carpeting driven into the ground.

Wagner said that because it was a former surface mine, the ground was loose. Flight 93 hit the ground at more than 500 mph, so some parts of the plane were driven deep underground and did not catch fire.

“It is the only crash site that provided physical evidence of the terrorists. That’s what the FBI told me,” Wagner said. “We found box cutters, coinage from Canada (where a hijacker is said to have traveled from) in one jacket, and plane ticket with a terrorist’s name on it.”

A steady stream of members of the public visited the site and by 2002, local folks organized the Flight 93 ambassadors, assuring someone would be on hand to talk about the crash and answer questions. It evolved into volunteer training and three ring binders with information to share.

Wagner volunteered and took a regular weekly shift telling stories of the people on Flight 93. Before the National Park Service designed the memorial, the visitation site was a chain link fence, 10 feet high and 40 feet long out in middle of nowhere.

“People were coming in on busses. It was quite a busy place,” Wagner said. “You come around a corner on a Sunday afternoon and you didn’t know how many buses would be there.”

The fence filled up with flags and memorabilia. One soldier visited, took off his boots, and left them there.

“It was very moving that way,” Wagner said. “It’s part of my life.”

“It was a really uniting time across the country. People mostly wanted to do something. There was a unified spirit in America. Everybody wanted to chip in. That has changed big time since then,” Wagner said. “There weren’t any Republicans or Democrats. We were just Americans. It’s a shame people forget so quickly. It’s still a democracy and we have the Constitution— it’s just different— attitudes of pride and attitudes of selfishness. It’s discouraging. We’ve gone through tough times before. I hope and pray the good Lord has mercy and calls godly leaders in the future.”

He says it is important to tell the next generations about the heroism and unity from that time.

“We’ve lost so many eyewitnesses along the way already, if we don’t tell the story, it will be lost,” Wagner said. “We tend to hear about the Twin Towers and the Pentagon. They and the story of Flight 93 needs to be taught in school. We’re getting close to two generations on now.”