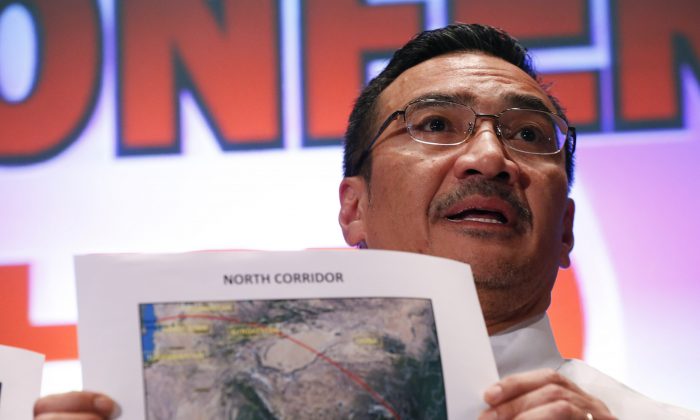 Malaysia's acting Transport Minister Hishamuddin Hussein shows maps of northern search corridor during a press conference at a hotel near the Kuala Lumpur International Airport, in Sepang, Malaysia, Monday, March 17, 2014. Twenty-six countries are involved in the massive international search for the Malaysia Airlines jetliner that disappeared on March 8 with 239 people aboard. They include not just military assets on land, at sea and in the air, but also investigators and the specific support and assistance requested by Malaysia, such as radar and satellite information. (AP Photo/Vincent Thian)
Asia & Pacific

Malaysia Airlines Flight MH 370 has not been found, but numerous scams and hoax reports are saying otherwise.

One claims that a piece of the plane was found in “the Persian Gulf,” but that’s from a fake news site called eBuzzd that frequently publishes celebrity death hoaxes.

Another one claims that the footage of the plane being hijacked was found. However, that’s just a scam going around on Facebook that is trying to get users to go to a bogus website that offers surveys. There’s no video footage of a hijacking.

And one says that the missing aircraft was found in the Bermuda Triangle with all its passengers alive. That’s also a Facebook scam.

Several of the scam posts have been using photos of the 2013 plane crash in Bali. A Lion Air jet missed the runway and landed in the water. In all, about two dozen people were injured.

According to The Associated Press, search teams are scouring both the northern and southern hemispheres for the missing jet.

French investigators landed in Kuala Lumpur to give expertise in the two-year search for an Air France jet that crashed into the Atlantic Ocean in 2009.

However, the case is different because officials believe Flight 370’s communications were deliberately cut off ahead of its disappearance a week ago.

“It’s very different from the Air France case. The Malaysian situation is much more difficult,” said Jean Paul Troadec, who is a a special adviser to France’s aviation accident investigation office.

Officials in Malaysia have said the plane deliberately veered off course of its flight path during a flight from Kuala Lumpur to Beijing on March 8. The plane then flew off-course for several hours.

The pilots of the plane are currently being investigated.

Hijacking, sabotage, pilot suicide, or mass murder have not been ruled out in the case. Officials are checking the backgrounds the 227 passengers and 12 crew members who were on board, AP reported.

“The fact that there was no distress signal, no ransom notes, no parties claiming responsibility, there is always hope,” Hishammuddin said.