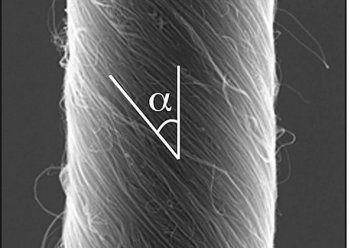 Scanning electron micrograph image of a 3.8-micron diameter carbon nanotube yarn that functions as a torsional muscle when filled with an ionically conducting liquid and electrochemically charged. The angle indicates the deviation between nanotube orientation and yarn direction for this helical yarn. (University of Texas at Dallas)
Science

By David Skoumbourdis
Print
A more durable flexible alternative to the electric motor has been created by spinning lengths of microscopic carbon nanotubes (CNT) into muscle-like yarns that twist like an elephant’s trunk.

The rotation produced is more than 1,000 times faster than previous artificial muscles, which are based on different systems.

An international research team developed the motor with a CNT-based artificial muscle at its core that is 10 times smaller in diameter than a human hair. Its power output is comparable to more complex conventional electric motors, but performance is not degraded despite miniaturization.

The motor comprises a CNT yarn, a yarn electrode, and a counter electrode submerged in a conducting liquid. A low voltage battery generates electromechanical charge and discharge applied to the yarn, creating torsional rotation.

Here torsional rotation means the yarn twists in one direction to an extreme point when an opposite charge is applied, causing it to rotate the other way, rather like elephant trunks and octopus tentacles work.

"The amazing thing about these [nanotube muscles] is their extreme simplicity. They just consist of a yarn, a counter-electrode which is basically salt-water and a battery," lead author Ray Baughman at the University of Texas told Cosmos Online.

"The muscles work like super capacitors," he added. "You apply a battery between the muscle and a counter-electrode and electrons are injected into the carbon nanotube muscle. Ions from the electrolyte then migrate into the yarn and cause it to expand and rotate"

In a demonstration, the motor drove a paddle 200 times larger in radius and 80 times heavier than itself, rotating it up to 590 revolutions per minute in 1.2 seconds.

"The discovery, characterization, and understanding of these high performance torsional motors shows the power of international collaborations," said Baughman in a media release.

"Researchers from four universities in three different continents that were born in eight different countries made critically important contributions."