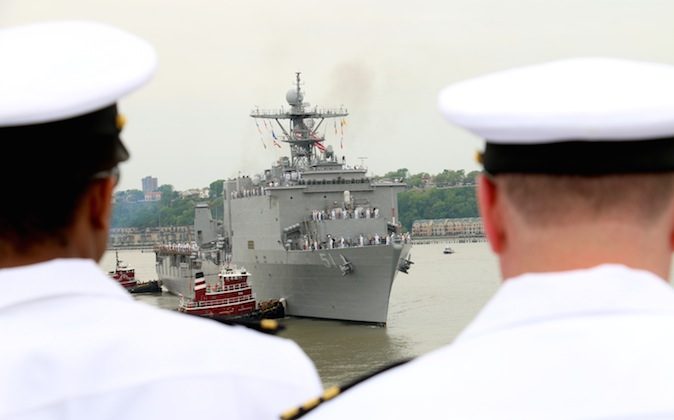 NEW YORK—Fleet Week is back in New York City after a one-year hiatus with 1,500 men and women from the US Navy, Coast Guard, and Marine Corps arriving by boat on Wednesday.

Fleet Week is a chance to meet and greet the men and woman who police U.S. waters, protect U.S. interests overseas, and risk their lives in combat to protect the country and its allies.

“You have to be wiling to sacrifice. It’s a selfless service,” said Adam Flores, a public affairs officer for the Marines. He recalls the intense 12-week training that all prospective marines go through to get their uniform. “Boot camp is a pretty grueling experience where they really mold you and make you understand what it is to be a marine. It takes a lot of dedication, a lot of physical training, as well as mental training to get prepared.”

During Fleet Week he says he is looking forward to seeing the 911 Museum, the 911 Memorial, and hopes to visit the Statue of Liberty as well.

The Navy Department, which encompasses the Marine Corp and the Navy, has 323,681 active duty officers and 108,496 personnel in reserve.

The Coast Guard, which is under the Department of Homeland Security in times of peace and under the president in times of war, is in charge of patrolling over 3.4 million square miles of coastal waters. With 35,000 plus active duty officers and about 8,000 reserves, the Coast Guard is a mere fraction of the size of the Navy.

“My favorite interesting fact is that the Coast Guard is actually smaller than the entire New York police department,” said Lauren Gainor, a marine vessel Inspector for the U.S. Coast Guard.

She is based in New York and inspects ships to make sure they comply with foreign and domestic laws. “I couldn’t be happier with any other job,” she said.

“I love New York, I hope the Mets win tonight,” said Anthony Costa, a Logistics Specialist in the Navy who is originally from Astoria Queens. He has been in the Navy for 16 years and sees his family in New York about every six months. He misses his family but says, “It’s just a small sacrifice you got to make to be successful in the long run.”

Three Navy ships and two Coast Guard cutters traveled up the Hudson, docking at Pier 92 in Manhattan and The Sullivans Pier in Staten Island.

The parade is noticeably smaller than in years past, a result of budget cuts that saw last year’s events canceled.

The parade of ships kicks off a week of events including ship tours, aerial demonstrations, and parades that will last until May 27th. The list of events can be found at fleetweeknewyork.com