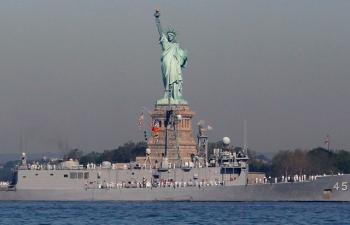 Sailors abroad the USS Comstock LSD 45 pass by the Statue of Liberty as it travels in New York Harbor May 26, 2010 in New York City. The 23rd annual Fleet Week, which honors the U.S. Navy and Marine Corps., begins today with eleven naval vessels heading into port where the ships and the sailors aboard will spend their week in the city. (Chris Hondros/Getty Images)
US

By Annie Wu
Print
NEW YORK—The 23rd Annual Fleet Week, a celebration in tribute of the men and women of the armed forces, began on Wednesday and runs through Monday, Memorial Day, in New York City.

Hundreds of men and women from the armed forces are sailing into New York Harbor and along different piers on the Hudson River. The events are centered at the Intrepid Sea, Air, and Space Museum at Pier 86.

The Intrepid Museum, itself a former World War II aircraft carrier, was dwarfed on Wednesday by the massive USS Iwo Jima. Along with the Iwo Jima, 10 other vessels passed under the George Washington Bridge and docked at several city piers for Fleet Week.

This year’s activities at the Intrepid Museum will feature performances and displays by men and women of service, as well as Broadway show cast members. Cast from Broadway musicals like “Wicked,” “American Idiot,” and “The Addams Family” are scheduled to perform at the Museum later in the week.

Representatives from the military will demonstrate military skills and participate in various competitions, such as tug-of-wars and inflatable jousting.

Tours of the Army Boat Vessel LSV-1, a vehicle landing ship, will take place on Friday, Saturday, Sunday, and Monday.

The Intrepid Summer Movie Series will also kick-off on Friday with free public film screenings on the flight deck, including Top Gun, Ghostbusters, and Raiders of the Lost Ark.

On Memorial Day, the annual commemoration ceremony will take place. The service will include the unfurling of a 100-foot American flag, ceremonial wreath-laying, and a military flyover.