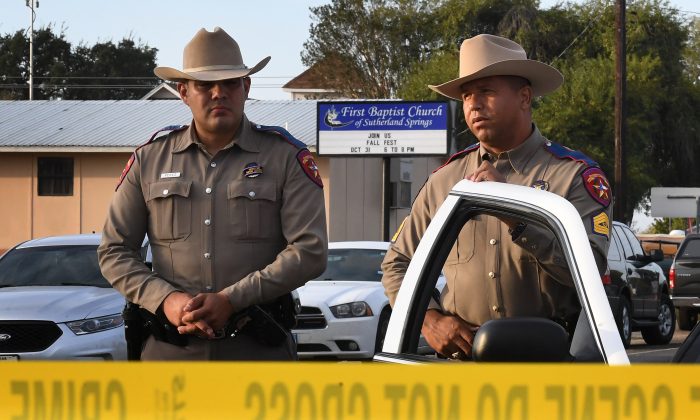 State troopers guard the entrance to the First Baptist Church (back) after a mass shooting that killed 26 people in Sutherland Springs, Texas on Nov. 6, 2017. (Mark Ralston/AFP/Getty Images)
Crime and Incidents

Devin Patrick Kelly was bleeding badly as he drove his Ford Expedition away from the Sutherland Springs First Baptist Church, where he had just shot nearly four dozen people.

In close pursuit behind him was the pickup containing a pair of Sutherland Springs citizens, one of which had shot him through a gap in his body armor.

Scared and hurt, Kelly picked up his cell phone and dialed his father.

“We know during that pursuit the suspect used his cell phone to notify his father that he had been shot and didn’t think he was going to make it,” said Freeman Martin, a Regional Director at the Texas Department of Public Safety, at a Nov. 6 press conference. “Subsequently he shot himself.”

It is not certain if Kelly died from the self-inflicted would or the wounds inflicted by Willeford. The official autopsy was conducted Monday morning, Nov. 9, but results weren’t yet released.

According to official counts, Devin Kelly had killed 26 people—23 inside the church and two outside. Another died at the hospital.

According to Director Martin 20 people were wounded. Six were stable or had been released, four were in serious condition, and ten were critical.

Director Martin also revealed that there was video taken inside the church during the shooting. he said that law enforcement was in possession of the video and had viewed it, but he would not reveal who had recorded it or what it showed.

Special Agent Fred Milanowski, in charge of the Bureau of Alcohol, Tobacco, and Firearms Houston (ATF) field office said that Kelly had three firearms in his possession.

“One was the Ruger .556 rifle which was recovered at the scene of the church. Two additional handguns were recovered from the vehicle of the suspect. One was a Glock 9-millimeter, and one was a Ruger .22,” Milanowski said. “I also can confirm that all three of these firearms were purchased by the deceased suspect.”

Director Martin confirmed that while Kelly was licensed as a “non-commissioned, unarmed private security license similar to a security guard at a concert type of situation” he did not have a license to carry firearms.

According to CNN, Kelly bought the rifle, a Ruger AR-556, in April 2016 from an Academy Sports & Outdoors store in San Antonio, Texas.

On Kelly’s background-check paperwork, he had claimed he had no disqualifying criminal history. He listed an address in Colorado Springs, Colorado, where he lived prior to moving to Texas.

Kelly had been court-martialed by the Air Force for assaulting his wife and child in 2012. He received a Bad Conduct discharge. The military does not divide crimes according to the civilian standard of felony or misdemeanor. It is possible Kelly was allowed to buy guns legally.

According to ATF agent Milanowski, “In general, if an individual has a dishonorable discharge from the military they would be prohibited from possessing or purchasing firearms.”

He added, “Until we can get all the documentation to determine exactly what his discharge was, exactly what was his conviction in the military, we will not have a determination on if this individual was prohibited from possessing or purchasing firearms.”