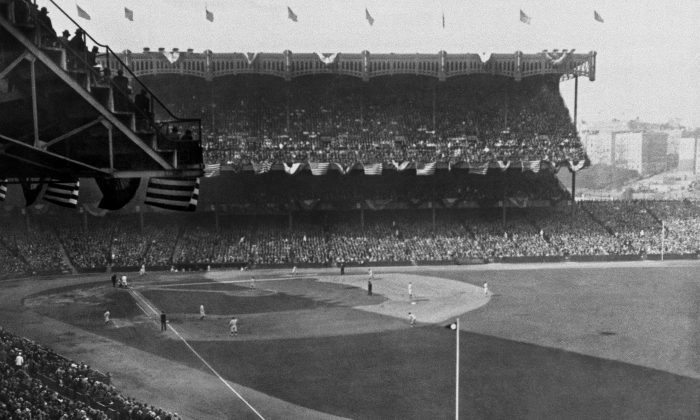 More than 60,000 fans jam Yankee Stadium for Game 3 of the 1927 World Series between the New York Yankees and the Pittsburgh Pirates, October 7, 1927. New York lefthander Herb Pennock took a perfect game into the eighth inning, until Pirates third baseman Pie Traynor singled with one out. Pennock finished the game, giving up just three hits, as the Yankees won 8-1. They went on to sweep the overmatched Pirates in four games for their second world championship. In his career, Pennock went 5-0 in World Series starts, all with the Yankees. (AP Photo)
12- OBSOLETE

Jacob Ruppert always insisted “Yankee Stadium was a mistake, not mine, but the Giants.”

And in truth, had it not been for the Giants, there might never have been a Yankee Stadium.

Beginning life as the Baltimore Orioles in 1901, the franchise moved to Manhattan in 1903 at the prodding of league president Ban Johnson who was determined to have American League representation in New York City.

The relocated club, named the Highlanders, played at Hilltop Park in Washington Heights for a decade. In 1913, now known as the Yankees, the team became tenants of the New York Giants at the Polo Grounds. It was a very unsatisfactory arrangement. The landlord Giants and the tenant Yankees never got along.

On January 11, 1915, Colonel Jacob Ruppert and Colonel Tillinghast L’Hommedieu Huston paid $460,000 to purchase the Yankees. They had wanted to acquire the Giants, but the Giants were not for sale. The Yankees, on the other hand, mismanaged for years by co-owners professional gambler Frank Farrell and ex-police commissioner Bill Devery, were on the block.

“It was an orphan club,” Ruppert said, “without a home of its own, without players of outstanding ability, without prestige.” In truth it was a team whose average annual attendance was 345,000 and whose dozen year record was a mediocre 861 wins and 937 defeats. But Jake Ruppert, the man they would later call “Master Builder in baseball,” would change all that.

On January 3, 1920, in a move that changed baseball history, Babe Ruth, 25, was purchased from the Red Sox. In his first season as an everyday player in 1919 with Boston he established a single-season home run record with 19. In 1920, he shattered that record, blasting 54 homers for the third place Yankees.

Fans in Babe Ruth’s phrase were coming out in “droves.” Yankee manager Miller Huggins explained: “They all flock to Babe Ruth because the American fan likes the fellow who carries the wallop.” Ruth’s Yankees were a magnet drawing more than a million each season from 1920 to 1922. Never had the Giants drawn a million fans. Angered and annoyed at the gate success of Babe Ruth and Company, the Giants told the Yankees to look around for other baseball lodgings.

Ruppert and Huston suggested the Polo Grounds be demolished and replaced by a 100,000 seat stadium to be used by both teams as well as for other sporting events. Nothing came of the suggestion.

So the duo set about to create a new ballpark. Shaped along the lines of the Roman Coliseum, it would be the greatest and grandest edifice of its time. Many sites and schemes were considered. One idea was to build atop railroad tracks along the West Side near 32nd Street. The Hebrew Orphan Asylum, at Amsterdam Avenue and 137th Street, was a serious contender. Long Island City in Queens was also given some consideration.

Finally, on February 6, 1921, a little more than year after the Yankees had acquired Ruth from the Red Sox, a Yankee press release announced that ten acres in the west Bronx, City Plot 2106, Lot 100, land from the estate of William Waldorf Astor, had been acquired for $675,000 (just under $8 million in 2007 dollars). The site sat directly across the Harlem River, less than a mile from and within walking distance of the home of the New York Giants, at the mouth of a small body of water called Crowell’s Creek.

Some noted the site was strewn with boulders and garbage. Others criticized the choice as being too far away from the center of New York City. Some dubbed the plan “Rupert’s Folly,” believing that fans would never venture to a Bronx-based ballpark.

“They are going up to Goatville,” snapped John J. McGraw, manager of the Giants. “And before long they will be lost sight of. A New York team should be based on Manhattan Island.”

Ruppert never publicly responded to McGraw’s criticism. But he did request newspapers to print the address of Yankee Stadium in all stories. And for the first game at his new baseball palace, he included on each ticket stub:

Design responsibilities for the new “yard” were handed over to the Osborn Engineering Company of Cleveland, Ohio. The White Construction Company of New York was awarded the construction job which Huston oversaw. Ever demanding and meticulous, Ruppert mandated that the massive project be completed “at a definite price” $2.5-million ( about $29-million in 2007 dollars) and by Opening Day 1923.

Ground was broken on May 5, 1922. Sixteen days later Ruppert bought out Huston’s share of the Yankees for $1,500,000. “The Prince of Beer” was now sole owner, a driven and driving force behind the vision of the new home.

A millionaire many times over, Ruppert enjoyed giving orders and having them followed to the letter. He lived at 1120 Fifth Avenue in Manhattan in a 15 room townhouse. He also had a castle on the Hudson.

Some thought his new baseball park should be named “Ruth Field.” Ruppert, however, was adamant that it be known as “Yankee Stadium.” It would be the first ballpark to be referred to as a stadium.

Original architectural plans called for a triple-decked park roofed all the way around. An early press release explained that the new ballpark would be shaped like the Yale Bowl, enclosed with towering embattlements making all events inside “impenetrable to all human eyes, save those of aviators.” Those without tickets would be unable to catch even a glimpse of the action.

However, that initial lofty design was quickly scaled down. It was thought those plans would create too foreboding a sports facility, being too much a tower and not a place to play baseball, being a place where the sun would hardly ever shine. Instead the triple deck would stop at the foul poles.

And Jacob Ruppert notwithstanding, action on the field of play would be visible from the elevated trains that passed by the outfield, from the 161st Street station platform as well as from roofs and higher floors of River Avenue apartment houses that would be built.

Fortunately, a purely decorative element survived the project’s early downsizing. A 15-foot deep copper frieze would adorn the front of the roof which covered much of the Stadium’s third deck. It would become the park’s signature feature.

The new stadium, virtually double the size of any existing ball park, favored left-handed power; the right-field foul pole was only 295 feet from home plate (though it would shoot out to 368 by right center). The left- and right-field corners were only 281 feet and 295 feet, but left field sloped out dramatically to 460 feet. Center field was a monstrous 490 feet away.

A quarter-mile running track that doubled as a warning track for outfielders surrounded the field. Under second base, a 15-foot-deep brick-lined vault containing electrical, telephone, and telegraph connections was put in place for boxing events.

Three concrete decks extended from behind home plate to each corner. There was a single deck in left-center and wooden bleachers around the rest of the outfield. The new stadium had the feel of a gigantic horseshoe. The 10,712 upper-grandstand seats and 14,543 lower grandstand seats were fixed in place by 135,000 individual steel castings on which 400,000 pieces of maple lumber were fastened by more than a million screws. Total seating capacity was 58,000, enormous for that time. (to be continued)