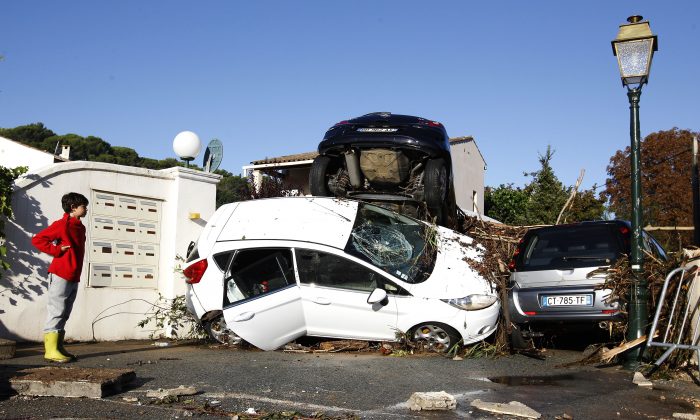 A boy stands next to rubble and damaged cars after violent storms and floods in Biot, southeastern France, on October 4, 2015. (Jean-Christophe Magnenet/AFP/Getty Images)
Europe

Victims were found dead in a retirement home, campsites, and cars submerged in a tunnel. Residents, stunned by the ferocity of the brief downpour Saturday night, described it as the worst flooding they’d ever seen—so dramatic that President François Hollande paid an emergency visit Sunday to promise government aid for victims.

The Cannes region saw the equivalent of two months of rainfall in less than two hours.

Helicopters patrolled the area and 27,000 homes were without electricity Sunday after rivers and streams overflowed their banks and fierce thunderstorms poured more than 18 centimeters (6.7 inches) of rain in Cannes and some other areas, according to the Interior Ministry. The Cannes region saw the equivalent of two months of rainfall in less than two hours, local radio France Bleu-Azur reported.

Hollande said the overall death toll by midday Sunday was 16, with three still missing. Government officials gave conflicting reports about casualty figures throughout the day, as emergency services fanned out across the region to check homes, stores, and overturned cars for victims.

“It’s not over,” Hollande said, visiting the flood-stricken retirement home in the town of Biot and meeting with emergency workers.

He expressed condolences to families of victims and urged residents to remain cautious, especially on the region’s roads, many of which remained impassable Sunday. He promised aid for residents hit by the flooding and lamented serious damage to local stores and other businesses.

Some residents criticized authorities for not doing more to prevent flood damage in the region, which is prized by tourists and residents for its mild year-round climate but which has seen increasing flooding in recent years. Local firefighters and meteorologists said the amount of rain Saturday was unusual for the region this time of year, but were especially shocked by the intensity and speed of the storm.

People were found dead in the towns of Cannes, Biot, Golfe-Juan, and Mandelieu-la-Napoule in the southeast, the president’s office said.

Three elderly people were killed in the retirement home, Hollande said. Three others were found dead in their car after entering a flooded tunnel, authorities in Golfe-Juan said. Interior Ministry spokesman Pierre-Henry Brandet said the dead included victims who had been trapped in a parking lot and campsites.

Winds and rain whipped palm trees along the famed Croisette seaside promenade in Cannes. Some cars parked near the Cannes shore were swept away and overturned by high waves.

In nearby Antibes, campsites along the Brague River were suddenly inundated with muddy water, leaving cars overturned.

Several trains were stopped because of flooded tracks, and traffic remained stopped along the Mediterranean coast between Nice and Toulon all day Sunday. Several roads were closed.

Some 2,500 Italian pilgrims—many of them sick and disabled—were among those stuck on trains. They had traveled to the Marian shrine in Lourdes, where the Catholic faithful often go seeking cures for ailments, and were en route back to Italy on five special pilgrim trains when the storm hit.

Several of the stalled trains carried specially outfitted hospital-style cars, able to accommodate people on stretchers. Unitalsi, an Italian group that brings the sick and disabled to Lourdes, said the pilgrims were generally in good health and spirits though officials expressed some concern for dialysis patients if the delays stretched on.

“The sick are being cared for and their trip has been going on for 15 hours, but thanks to the help of all the volunteers on board the situation is under control,” the head of Unitalsi, Salvatore Pagliuca, said in a statement.

The Italian Foreign Ministry said it had mobilized its embassy in Paris and consulates in Nice and Marseille to get the Italians home. After several hours of delay, the five trains resumed their trip home, Unitalsi said on its Facebook page. Some had a long way to go as they were destined for Puglia and Sicily in Italy’s south.

The flooding also disrupted a French league soccer match in Nice, forcing the stadium to shut down in the middle of play.

Hundreds of emergency workers were involved in rescue efforts Sunday, helped by bright sun contrasting sharply with the sinister skies the night before.