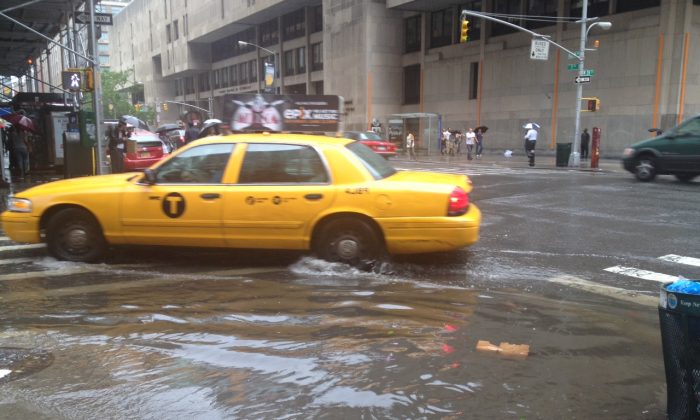 A taxi drives the through the rising water at the corner of 7th Ave and 28th Street in Manhattan at approximately 3:45 p.m. on May 23, 2013 during the heavy rainfall in New York. Flash flood warnings were issued by the National Weather Service until 5:30 p.m. (The Epoch Times)
New York

A flash flood warning was issued for parts of New York City and New Jersey on Thursday afternoon.

“These thunderstorms will be capable of producing rainfall rates in excess of one inch per hour,” reads an advisory, referring to the storm system lingering over the Tri-State region.

“Excessive runoff from heavy rainfall will cause flooding of urban areas … highways … streets and underpasses as well as other drainage areas and low lying spots,” the agency said.

NJ.com reported that more than three inches of rain has fallen in portions of New Jersey. The storm is expected to bring more winds, rain, and possible hail into the weekend.