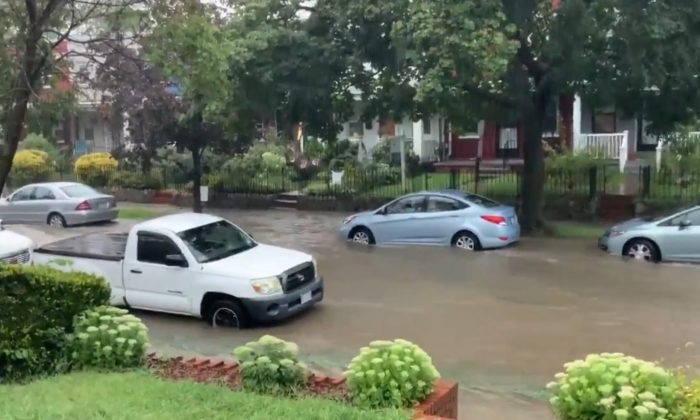 A flash flood emergency has been issued for the Washington D.C. metro area until 11:15 a.m. by the National Weather Service. (Lauren Ruffin via CNN)
US News

A flash flood emergency has been issued for the Washington D.C. metro area until 11:15 a.m. by the National Weather Service.

In the last hour alone, some spots just west of the nation’s capital have seen over 3 inches of rain, especially along the Potomac River.

Extremely heavy rain continues to fall over much of the area, including the District of Columbia.

Storms are also affecting airports, with traffic heading to Reagan National stopped on the ground. Departure delays by more than one hour have been reported.

“Excessive runoff from heavy rainfall will cause flooding of small creeks and streams, urban areas, highways, streets and underpasses as well as other drainage areas and low lying spots,” according to the weather service. More than a dozen high water rescues have already been reported in the area.

“Most flood deaths occur in vehicles,” according to the National Weather Service, which advises against driving into “any area where water covers the road.”

Our top weather story this AM comes out of Washington DC where a Flash Flood Emergency was issued earlier. Reagan National Airport reported 3.3″ of rain IN AN HOUR! Always turn around, don’t drown when you encounter flooded roadways! pic.twitter.com/tYw5JtfZPo

The service requests motorists to “move to higher ground as quickly as possible.”