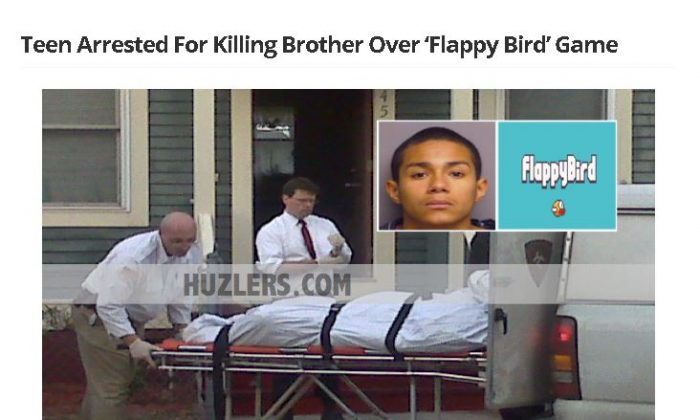 A fake news story claims that a teen was arrested for killing his brother over the increasingly popular Flappy Bird game.

The satire story comes from Huzlers.com, which makes up stories, similar to The Onion.

Because the website is not as well-known, people are often confused about whether the stories are real or not.

According to its disclaimer at the bottom of the page, Huzlers “is a combination of real shocking news and satire news to keep its visitors in a state of disbelief.” However, the vast majority–if not all–of the articles on the website are fake.

The story claims that Chicago teenager Gary Wright, 16, was playing Flappy Bird with his brother Jabari, 17, when Jabari started teasing Gary that he was getting higher scores than him.

Gary purportedly killed his brother over the teasing then called police and turned himself in.

The story quotes a police officer Marco Grant: “It’s a tragedy, he murdered his own brother because of a stupid game, I mean, Iv’e played the game before, and it’s hard as [expletive], [expletive] that game!”

The story also claims that Gary told investigators “Anyone who has played that game would know why I did it.”

The fake story has been liked over 14,000 times on Facebook and believed by some.

“Y’all are stupid this is real i seen it on the NEWS…..” said another.

Other fake stories on the website include “President Barack Obama Outlaws Twerking,” and “JUSTIN BIEBER ESCAPES JAIL AFTER BEING ARRESTED FOR DUI AND ILLEGAL RACING.”