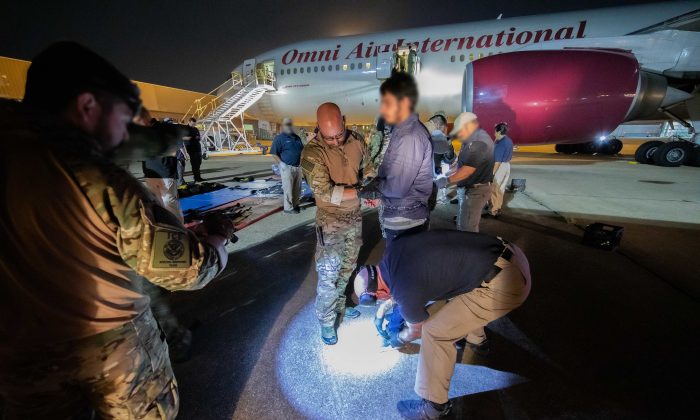 Thirty-seven Cambodian nationals, most convicted criminals, were repatriated to Cambodia on July 4, 2019. (ICE)
US News

ICE Disputes Claim That Only 2.8 Percent of Deported Are Convicted Criminals

WASHINGTON—An academic group that tracks government programs says that only a tiny portion of people deported from the United States this year were removed due to criminal convictions—a claim that Immigration and Customs Enforcement (ICE) says is based on a misinterpretation of the data.

“Despite the administration’s rhetoric of deporting ‘criminals’ from this country, the latest data from the Immigration Courts through June 2019 shows only 2.8 percent of recent Department of Homeland Security (DHS) filings based deportability claims on any alleged criminal activity,” the Transactional Records Access Clearinghouse (TRAC) at Syracuse University stated in a report made public on July 19.

“This is way down from the emphasis on deporting criminals that prevailed a decade ago.”

TRAC uses the Freedom of Information Act (FOIA) to obtain official data from multiple federal agencies, then conducts statistical analyses based on that data. It releases regular reports on its findings. The July 19 report was based on data obtained from filings in federal immigration courts by ICE.

By comparison, more than 16 percent of deportability claims filed in 2010 were based on alleged criminal activity, according to TRAC.

President Donald Trump said on July 12 that multiple enforcement operations were being launched by ICE agents across the nation to find and remove individuals involved in criminal activities.

Thus far, the number of deportations that have resulted from the ICE operations haven’t been made public by the government, but the TRAC report raised questions about the credibility of official immigration statistics.

“Similarly, even the number of Immigration Court filings citing criminal grounds is way down,” TRAC reported. “Despite the rising number of ICE interior arrests and individuals who are detained, fewer and fewer immigrants in the Immigration Court’s growing workload are being cited as deportable based upon criminal activity.

The total of such cases during the first nine months of federal Fiscal Year 2019—Oct. 1 through June 30—only 7,458 cases were filed, TRAC said.

“If this same pace continues for the remaining three months of the years, the total is still unlikely to reach 10,000. A decade or more ago immigrants with criminal records or alleged criminal activity involved 30,000 to 40,000 court filings each year,” the group said.

The data made public by the TRAC report directly conflicts with previous statements by federal officials.

A senior ICE official who reviewed the group’s report told The Epoch Times on July 19 that “it clearly is not accurate.”

The official, who asked not to be identified, said: “We don’t need some sort of criminal activity to get someone removed. We remove people from the country because they are removable administratively.

Criminal activity is noted in court filings in cases involving an individual who committed a crime that would result in termination of a previously legal status, the official said.

“If someone has a legal status, something like a Legal Permanent Resident, but they participate in crimes involving what is called ‘moral turpitude’ like serious crimes that involve a year or more in prison, then we can say, ‘Hey, this is the criminal background of that person, this is why their LPR status needs to be revoked,” the official said.

A TRAC spokesman couldn’t be reached for comment on the official’s statement.

He said his agents are “ready to just perform their mission, which is to go and find and detain and then deport the approximately one million people who have final removal orders.”

The people targeted by the enforcement actions “have been all the way through the due process and have final removal orders,” Cuccinelli said.