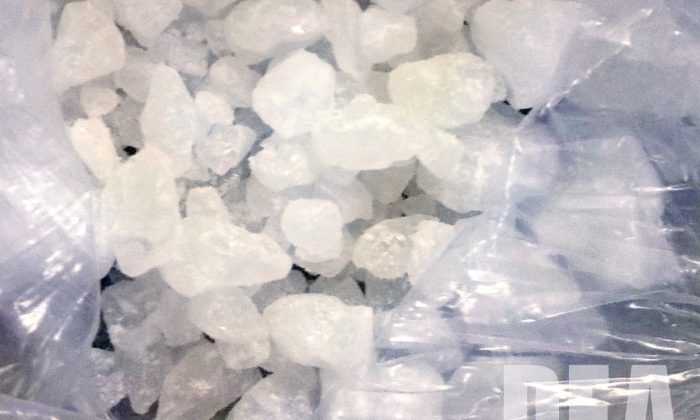 Flakka: New Scary Street Drug Emerging in NYC; What Is It Made Of?

Flakka, also known as gravel, is related to “bath salts” and comes in whitish crystal chunks. The drug, which is man-made, has a high similar to cocaine, but has the potential to be more dangerous.

Flakka is made of a compound called alpha-PVP, a chemical cousin of cathinone, the amphetamine-like drug in bath salts. Bath salts was officially banned in 2011, but alpha-PVP was not. That means it’s legal in any state without a ban.

“It’s so difficult to control the exact dose [of flakka],” Jim Hall, a drug abuse epidemiologist at Nova Southeastern University in Fort Lauderdale, told CNN in August. “Just a little bit of difference in how much is consumed can be the difference between getting high and dying. It’s that critical.”

The drug can be smoked, snorted, injected, or eaten. Hall said that it can cause violent behavior, spikes in body temperature, and paranoia. “It’s an agitated state, causes heart attacks, paranoia, schizophrenia,” Hunt told the station.

A report from Vice described one flakka encounter: “A video captured by the body cameras of two cops in southern Illinois last month reportedly shows a naked man, allegedly high on the drug flakka, violently thrashing around his home, flipping over furniture, banging into walls, yelling, and avoiding all attempts by police to subdue him.”

According to the PIX report, the drug is manufactured in China and India and can be purchased online.

Florida has been the hardest-hit state in the flakka epidemic. Apparently, the drug can cause users to have “crazy strength — would take four police officers to restrain you,” Hunt added.

In New Jersey, the drug is also apparently catching on.

Bergen County Assemblyman Tim Eustace introduced a bill in the state to ban it.

“We’ve got a big drug problem in New Jersey and we want to exclude [flakka] for them,” Eustace said. “As quick as we make the laws, the chemists can make new versions of the drug.”

New York mother Deirdre Canaday said her son, Aaron Stinson, was only 26 years old when he died from chemical cannabinoids, warning that “synthetic drugs are the future” of getting high.