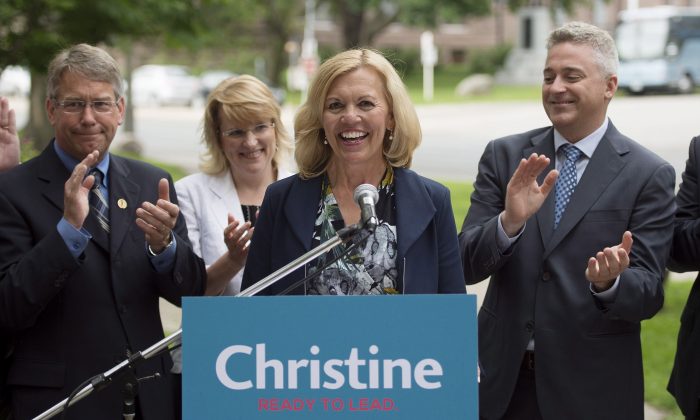 Christine Elliott, widow of former federal Finance Minister Jim Flaherty, announces her intention to run for the Ontario PC leadership during a press conference in Toronto on June 25, 2014. (The Canadian Press/Darren Calabrese)
Canada

Elliott became the first candidate in the running to succeed Progressive Conservative Leader Tim Hudak, who is stepping down following the party’s crushing electoral defeat earlier this month.

It marks her second attempt to lead the party—she finished third when Hudak won the Tory leadership race in 2009—and she said Wednesday that Flaherty wanted to see her succeed.

Elliott entered politics in 2006, winning a byelection in Whitby, east of Toronto, when Flaherty vacated the seat to run federally. It became the first time in Canadian history that a husband and wife represented the same riding at the provincial and federal levels. No byelection has yet been called to fill the seat federally since Flaherty died in April.

She said Wednesday that “there’s no question” she had an opportunity to consider running federally, but her heart is in provincial politics.

Elliott, a University of Western Ontario law graduate and co-founder of law firm Flaherty Dow Elliott & McCarthy, married fellow lawyer Jim Flaherty in 1986. Flaherty said in a 2002 interview that his wife considered entering politics before he did, but she put those ambitions on hold when their triplet sons were born in 1991.

Flaherty himself twice tried to lead the Ontario Tories, but both his bids in 2002 and 2004 failed.

Hudak is vacating the post July 2, when the legislature resumes, after his party lost nine seats in the June 12 provincial election and voters handed the Liberals a majority government. The Tories will appoint an interim leader who will serve until a new one is chosen, but no date has been set for a leadership convention.

Elliott acknowledged “a certain degree of frustration” in her party about the loss and vowed to rebuild. She returned several times during her news conference Wednesday to the theme of listening to everyone, as she vowed to rebuild.

“I think that’s something that has been underestimated,” she said.
Many Tory members of the provincial legislature had complained they were not told about the party’s election pledge to cut 100,000 public-sector jobs until hours before Hudak announced it in the first week of the campaign.

The promise dominated the headlines for weeks and prompted public-sector unions to launch unprecedented anti-Tory campaigns, including a series of attack ads that saturated TV and radio.

“I had a good relationship with (the central campaign), but I think that there were some people that feel that they were left out and I think that that’s not something that I want to do,” Elliott said.

She said a line-by-line analysis needs to be done on the size of government, but she wouldn’t commit to a similar 100,000 figure.

“We can’t just go and take away jobs just for the sake of it,” Elliott said. “We need to look at what’s providing value for Ontario taxpayers and then make changes as they’re needed. I can’t begin to tell you exactly what the size should be.”

Elliott, 59, made her announcement Wednesday flanked by several caucus colleagues. She echoed her mantra from the 2009 leadership race of fiscal conservatism and social responsibility.

“I think that good economic policy enables good social policy,” she said. “We need to make sure that we work hand in hand with fiscal responsibility and social compassion. I would say that’s probably the most important thing that I would want to bring to the table.”

Elliott described herself as a lawyer, an entrepreneur, an advocate for vulnerable people and “most importantly,” a mom. She and Flaherty were actively —and mostly quietly —involved in issues dealing with children with special needs. One of their sons has a learning disability.

She is the interim chairwoman of the Abilities Centre, a fully accessible facility in Whitby whose mission is to “enrich the quality of life for people of all ages and abilities through an inclusive environment.”

Elliott also spent time working early in her career as a senior investigator for the Ontario ombudsman’s office and international audit counsel at the Bank of Nova Scotia.

The next provincial election may be four years away, but it’s not a very long time, considering the amount of work that has to be done, Elliott said.