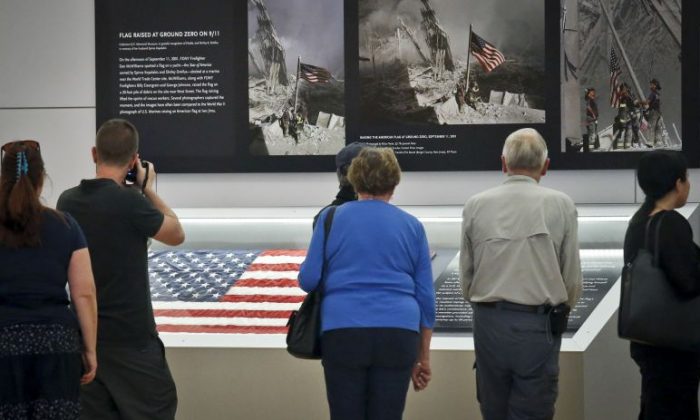 Visitors view the display for the American flag, left, that firefighters hoisted at ground zero in the hours after the 9/11 terror attacks, Thursday Sept. 8, 2016, at the Sept. 11 museum in New York. After disappearing for more than a decade the 3-foot-by 5-foot flag was donated to the museum after it was turned in two years ago by an as-yet-unidentified man at a firehouse in Everett, Wash. (AP Photo/Bebeto Matthews)
New York

NEW YORK—An American flag hoisted at ground zero hours after the Sept. 11 terror attacks has taken its place at the World Trade Center complex after disappearing for more than a decade.

The 3-foot-by-5-foot flag went on display Thursday at the National Sept. 11 Museum. The museum’s president, Joe Daniels, calls it “one of the most emotionally and historically powerful” artifacts in the collection.

The flag was the centerpiece of a photo that became a defining image of patriotic perseverance. The image shows three firefighters raising the flag over the rubble.

Two years ago, the flag was turned in by an as-yet-unidentified man at a firehouse in Everett, Washington.

Examinations indicated it was indeed the same Star Spangled Banner.

A documentary about it airs Sunday on the History Channel.