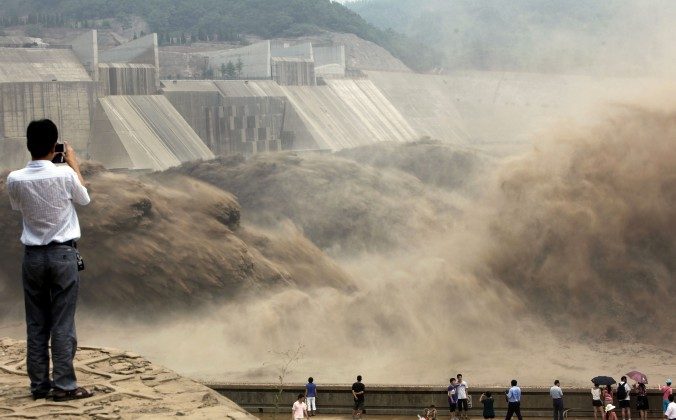 Giant gushes of water are released from the Xiaolangdi Dam to clear up the sediment-laden Yellow River and to prevent localized flooding, in Jiyuan, in central China's Henan Province on July 6, 2012. (STR/AFP/GettyImages)
China

The plan is supposed to reduce China’s water pollution by 30 to 50 percent according to a report by state-run Xinhua, however New York based environmental researcher He Zhe doubts the plan can achieve anything, as US$333 billion is far from enough.

Referring to China’s many chemical plants, steel factories, fertilizer and pharmaceutical manufacturers that are the source of soil pollution, Mr. He told Sound of Hope Radio (SOH), “Unless you wash the soil clean, rainfall and rivers will carry the pollution into the drinking water system.”

“The key is not about how much money you spend, it’s the authorities’ inaction toward the sources of the pollution [that’s the problem],” Mr. He said.

Results from a study conducted by China’s Youth Daily of the water quality in 118 Chinese cities shows only 3 percent of the water bodies could be classified as clean; 64 percent of the cities’ underground water is “severely polluted,” and the remaining is “just polluted.”

Mr. He said that because there is no system in place in China that forces polluters to provide real compensation to victims, plus authorities are not serious about enforcing regulations, the cost of discharging pollution is very low for these enterprises.

“In fact, the increasing volume of pollution has led to a pollution cleanup industry, which is seeing a significant growth in revenue,” Mr. He said, adding that the only solution to stop the polluting factories is to shut them down.

Wang Jian, a water environmental researcher from Beijing, told SOH that China’s measures to improve water quality have been largely unsuccessful despite spending a lot of money.

Wang pointed out that although large sums of money have been given to pollution cleanup businesses, these services cannot keep up with or prevent emerging pollution problems.

Chinese environmentalist Ma Jun, director of the Institute of Public & Environmental Affairs, once made this comment: “It takes 1,000 years for China’s deep ground water to recover its quality, and the worst thing is that China still has no effective law or regulation to prevent ground water pollution.”

Translation by Tan Hohua. Written in English by Arleen Richards and Gisela Sommer.