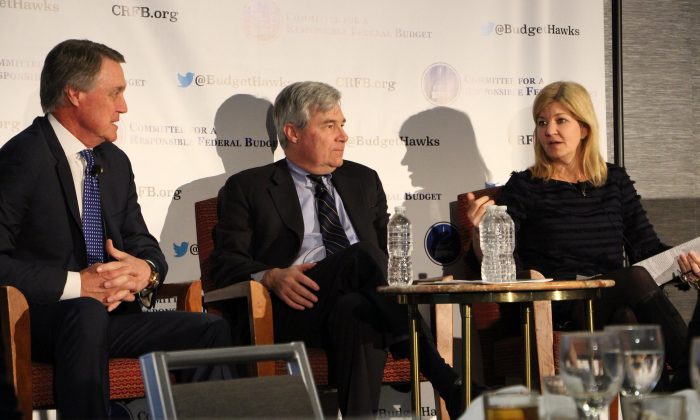 Then-Sen. David Perdue (R-Ga.) (L), Sen. Sheldon Whitehouse (D-R.I.), and President of the Committee for a Responsible Budget Maya MacGuineas at the 2018 Better Budget Process Summit in Washington on Feb. 26, 2018. (Courtesy of the CFRB)
Economy

Cutting the U.S. government’s budget is the best way to deal with out-of-control inflation, according to Maya MacGuineas, president of the Committee for a Responsible Federal Budget (CRFB).

Annual inflation hit 9.1 percent in June, which is a new four-decade high. Calling the numbers “eyepopping,” MacGuineas said in a July 13 CRFB statement that taming inflation should be a “top national priority.”

The Federal Reserve is going to need help bringing down inflation without pushing the economy into a recession, and the best thing lawmakers can do in the short-term is pass a “deficit reduction reconciliation bill,” she said.

“Legislation could temper excessive demand among those who can best afford to reduce their spending and more directly lower prices by reducing prescription drug costs,” MacGuineas said.

Some lawmakers are continuing to insist on tax cuts “by increasing the $10,000 cap on the state and local tax deduction (SALT).” The SALT deduction provision allows taxpayers who itemize when filing federal taxes to deduct certain taxes paid to local and state governments.

MacGuineas believes that increasing the cap on SALT will be costly and add to inflationary pressures. A proposal passed by the House seeks to reduce taxes by $50 billion annually, almost 95 percent of which will benefit the country’s richest fifth of households.

By helping the Federal Reserve rein in inflation, Congress has the best path to preventing a recession, she said. That involves reducing spending and increasing revenues rather than cutting taxes for wealthy households.

In a July 14 blog post, CRFB criticized policymakers for doing little to contain the $24 trillion in national debt. Most legislation in recent years has “added” to the budget deficit, the organization stated.

In fiscal year 2021, the federal deficit totaled nearly $2.8 trillion, which is almost triple the 2019 shortfall. The fiscal year 2021 deficit was at 12.4 percent of gross domestic product, up from 4.7 percent in 2019, according to data from the Congressional Budget Office.

High debt and deficits in a high inflation environment will make it very hard to borrow in situations such as a recession. A deficit-reduction reconciliation measure is “likely to reduce, not increase,” the risk of recession, CRFB stated in another July 14 article.

As many Democratic lawmakers continue pursuing revised filibuster-proof budget reconciliation legislation, some, such as Sen. Joe Manchin (D-W.Va.), have expressed discomfort about passing a large spending measure now that inflation is at record highs.

“It depends on if we can look at things and find a pathway forward that’s not [inflationary],” Manchin recently told reporters. “We know what we can pass. It’s basically the drug pricing on Medicare. Is there any more we can do? I don’t know. But I’m very, very cautious.”