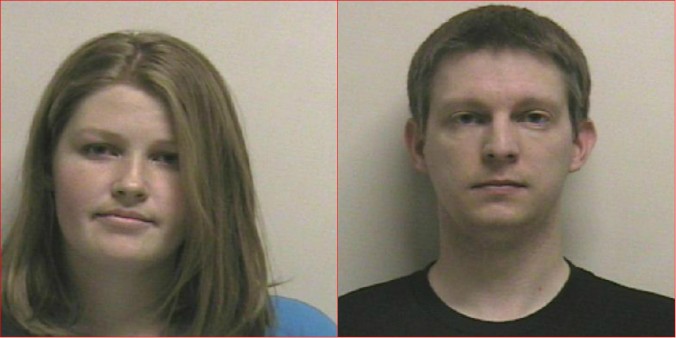 The parents of a young boy have been arrested on felony child abuse charges for keeping him locked in a dark cramped basement room without food, water, or a bathroom for 12 hours a day and forcing him to eat mostly carrots, police say.

The parents kept the boy, who was 5 at the time, locked in a cramped 10-foot-by-10-foot room from 6 p.m. until 6 a.m. The room was locked from the outside, had a loose carpet, and only a mattress and a blanket to sleep with.

The boy went to the bathroom in the room and had to dispose of the waste through a hole in the wall to avoid being punished.

It is unclear how long the parents forced their son to sleep in the room, Cannon said.

“It’s been at least several months,” he said. “We are still investigating; trying to find out how long this has been going on.”

The father refused to talk to police, Cannon said. The mother “did express that she didn’t know that it was against the law to lock your child in a room,” he added.

The parents fed the boy a diet that consisted mostly of carrots. The boy would be denied meals if he did not eat his carrots in a specified time limit. The parents punished him once for eating a sample at a supermarket, because he was forbidden to eat anything without first eating carrots.

The arrests are the result of several months of investigation by the Utah Division of Child and Family Services (DCFS). The investigators interviewed witnesses, including the boy himself.

“Some of the witnesses we’ve spoken to had been in the home and had seen some things that caused them concern,” Cannon said.

The Tobiassons adopted the boy and his two-year-old brother, the sheriff’s office said. The couple also have a two-month-old girl. The children were taken away from the couple in June.

Kimberly Capson, a neighbor, was surprised at the accusations.

“They are just an average family. They were really sweet,” Capson said. “It is shocking, and it just breaks my heart as a mom to see that this has happened, and so close to home when, you know, we didn’t see any warning signs.”