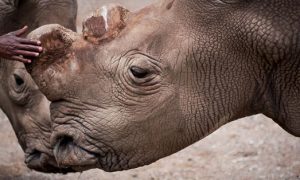 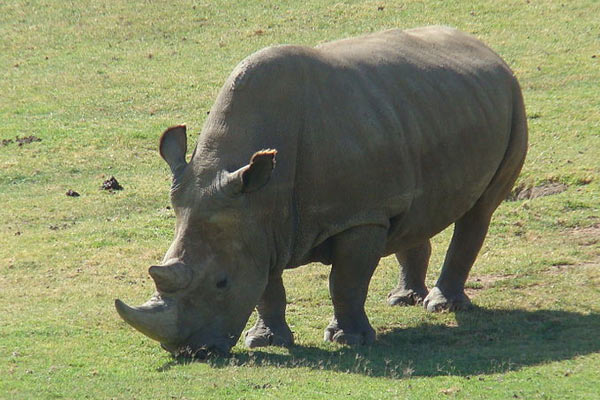 As if news for rhinos couldn’t get any worse: this weekend, Angalifu, died at the San Diego Zoo. Forty four-year-old Angalifu was a male northern white rhino (Ceratotherium simum cottoni) and his death means only five of this subspecies remains on the planet. Angalifu’s death, which keepers suspect was simply from old age, follows soon after the death of another northern white rhino, Suni, in October.

“Angalifu’s death is a tremendous loss to all of us,” Randy Rieches with the San Diego Zoo said. “Not only because he was well beloved here at the park but also because his death brings this wonderful species one step closer to extinction.”

With Angalifu’s death, San Diego Zoo is home to a single northern white rhino, Nola. Another northern white rhino is housed at the Dvůr Králové Zoo in the Czech Republic, the only zoo that had success in breeding the subspecies. Finally, three northern white rhinos are living in semi-wild conditions in the Ol Pejeta animal sanctuary in Kenya. But experts there have given up on natural reproduction, meaning the fight to save the species has now turned to in vitro fertilization.

Northern white rhinos were once found in Uganda, South Sudan, Chad, the Central African Republic, and the Democratic Republic of the Congo (DRC). In the 1980s, the subspecies almost went extinct due to that a poaching crisis. After the dust settled only 15 were left. For a time it seemed the subspecies might make a comeback, but then rhino poaching came back with a vengeance in the mid-2000s wiping out the last known wild northern white rhinos from Garamba National Park in the DRC.

Rhino poaching is currently out of control in Africa. This year has seen a new record for poaching in South Africa—1,020 rhinos as of late November—where the bulk of the criminal activity occurs.