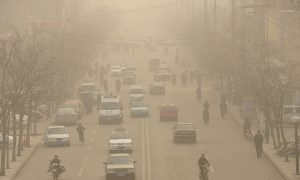 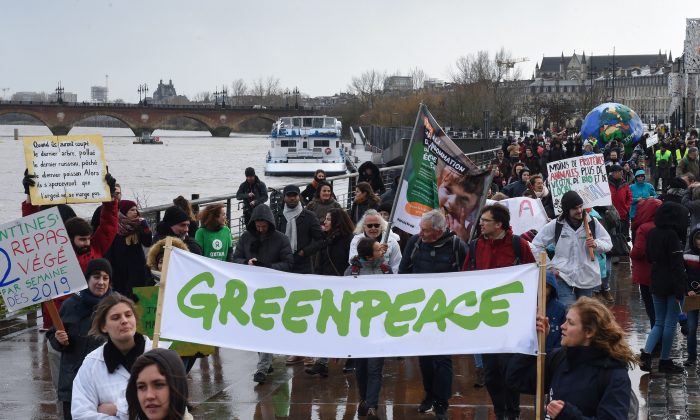 People hold a banner reading "Greenpeace" as they take part in a march for the climate, in Bordeaux, on January 27, 2019. MEHDI FEDOUACH/AFP/Getty Images
Viewpoints

It’s been more than 35 years since, fresh out of Loyola University armed with a degree in chemistry, I started working in the environmental field.

I’ve been blessed to work with, and for, hundreds of men and women whose efforts, dedication, and skill keep U.S. industry running, generating goods and services, providing employment, and paying huge amounts of tax revenue.

These are not the highly paid CEOs who run big corporations and who are so easily demonized. These are the people in the trenches who do the hard work that creates wealth. They continue to amaze me.

While I don’t believe it’s the intent of the big environmental groups such as the Sierra Club, National Resources Defense Council, and Greenpeace to hurt the people that keep the gears of American industry turning, it’s clear to me that that’s the effect those organizations are having, with greater and greater frequency.

Here are five ways that environmental non-governmental organizations (NGO) hurt American industry, and—most importantly—the men and women who depend on those factories for a paycheck and whose talents keep them running.

One of the unintended consequences of environmental activism is the way it often triggers the law of unintended consequences. Specifically, by blocking new projects and innovations in certain high-profile industrial sectors, environmental activists effectively force companies to limp along with less-efficient equipment that pollutes more than their modern equivalent.

Consider, for example, the petrochemical industry, which is always a popular target for environmental NGOs. Refineries need steam, lots of steam, which means they have boilers.

Let’s say a refinery wants to replace its boilers built in the 1940s with new, more-efficient, less-polluting versions. The project comes to the attention of one of the big enviro-NGOs that mobilizes its members to oppose it. The message that the refinery is making a net change for the better gets lost, drowned out by the crafted, isolated message that the refinery is putting in equipment that will generate a ginormous amount of pollution.

Over the years, environmental activists have been very successful in convincing legislators and regulators to continually increase levels of public participation in environmental permitting processes. While this sounds like a good idea, it also provides a means for savvy activists to throw roadblocks into the system.

As part of its program to eliminate coal as a fuel in the United States, branded as “Beyond Coal,” the Sierra Club would mobilize members to file public comments in opposition to new coal projects. Sierra Club attorneys surely understand that most public comment rules require the permitting agency to respond to each and every comment filed. The more comments, the longer it takes the agency to respond.

The Sierra Club was often successful in generating thousands upon thousands of public comments, creating lengthy delays that frustrated project investors and ultimately killed numerous projects. As a result, the power industry was denied the opportunity to replace many old, inefficient power plants with new facilities.

It’s reasonable to assume that environmental NGOs receive the majority of the funding they depend upon from donors living in the United States and other industrialized nations. That would seem to be the reason so many of them continue to push the narrative that the United States is full of big polluters that are putting the planet and its inhabitants in danger, while remaining largely indifferent to environmental issues in other parts of the world.

That’s unfortunate because the environmental hazards faced by people who live in under-developed nations, like many of those in Africa, and developing nations such as China and India are so much worse than anything people living in the United States have had to deal with for decades.

Continuing to demonize Americans as evil polluters may be good for the pocketbooks of the environmental NGOs, but that tired message grows less and less relevant to the vast majority of earth’s inhabitants.

Can you remember the last time the Sierra Club, National Resources Defense Council, etc. made any effort during Earth Day to acknowledge the remarkable environmental progress we have made in America over the past 50 years, or to thank the millions of Americans who made that progress possible? Neither can I.

The message that environmental NGOs push on Earth Day, and pretty much every day, is based on guilt: The planet is dying and it’s your fault. The United States is the worst polluter ever and that’s your fault, too. For those of us who have been part of the amazing environmental progress the United States has made over the last few decades, that cynical, self-serving choice of narrative is disturbing. It prevents millions of Americans who know how unfair these groups are from trusting anything they have to say.

Acknowledging all of the environmental progress we have made would go a long way to restoring the credibility of the big environmental NGOs among the working men and women who have learned to dismiss anything those NGOs have to say.

Fear is a great salesman, and great salesmen stand out in a free market. Companies move in to profit from fear. The great principle of toxicology is “the dose makes the poison.” That principle is anathema to environmental NGOs that routinely use the public’s understandable ignorance of the fine points of toxicology and risk assessment to rally the troops to oppose targeted projects or companies.

Lead is a great example. Most everyone knows that lead is “toxic.” Few know, or care, that: 1) there are indeed safe levels of lead exposure that have been established by organizations such as the World Health Organization and the Occupational Safety and Health Administration, and 2) it is impossible to come up with an absolute zero result in potential lead-containing substances such as steel and water. Given an instrument sensitive enough, you’re going to find it. Regardless, companies are happy to sell you everything from water filters to pet bowls to protect you from the horrors of lead exposure.

It’s not my intent to single out stainless steel, but rather to make the point that even the most innocuous of substances can be made to seem dangerous if one presents data in a purposed manner.

Having skewed the public’s view of toxicology and risk for so long, environmental NGOs bear a great deal of responsibility for this unscientific state of affairs.