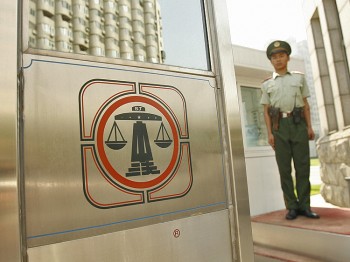 To the outside world, the Chinese regime purports to have a functioning legal system, buttressed by the rule of law, but to anyone who has tried to function within that system, the experience is much the opposite.

Canadian Lawyer Clive Ansley, a Mandarin-speaker and specialist in Chinese law, recounted in a previous article for The Epoch Times the tale of a Canadian judge who visited China. When the judge returned, he told 300 trial lawyers how the Chinese judicial system was “so far ahead of us” because the courthouse he visited was decked out in marble and plasma TV screens.

What the judge had failed to recognize, said Ansley, is that courtroom decisions are made by political authorities, not judges, and that despite the reams of new laws being written by the Chinese Communist Party (CCP), no law stands above the regime.

What Ansley’s comments bespeak are the set of unwritten laws that bolster China’s legal system. Below are five of these “laws” as identified by Chinese lawyers based on their personal experiences.

1. Outcomes Are Decided at Pre-Trial

Professor He Weifang at the Beijing University Law School published an article titled “For the Law, and For the Ideology in Our Heart” on his blog last April. In it, he explains how trials, particularly important ones, are mostly for show.

“The outcome of certain important cases has been decided pre-trial in collusion among heads of the court, the procuratorate [prosecutor and investigator], and public security. The final court trial is just for show.”

Zhou Binqing, a prominent Internet intellectual property attorney, told The Epoch Times, “When I first became a lawyer, I loved criminal cases because they were challenging. But after a few cases, I realized that Chinese lawyers are useless in criminal cases. Often times, when the lawyers are still debating, the verdict has already been determined. No matter how superb the lawyer is in court, the final outcome has been pre-determined."

Attorney Xu Shurong, from Sichuan Construction Law Firm, told The Epoch Times that he has not taken on any new cases in a long time, because he found the legal system so corrupt as to be unworkable.

He described a case he took on for a company that went to Chengdu Court. He said that despite the strong evidence he provided to support his client, he failed to win his case. The reason he lost, he said, was that the defendant paid a pricey bribe to the court.

“In Chengdu, capital of Sichuan Province, the deciding factor to win a case is to pay the judge and relevant personnel a monetary amount equal to one third of the amount being sued for. This is the unspoken rule in the Chinese legal system. Whoever pays more, wins. In my case, the defendant gave the judge over 200,000 yuan [US$31,000].”

3. Lawyers Are the Underclass

Xu also explains how in China, lawyers are a poorly treated underclass.

“Chinese lawyers are actually among the lower class of the society, they have no basic salary or insurance. After they get payment from a case, they have to pay 6.8 percent sales tax, the law firm takes 30 percent overhead, and then they have to pay personal income tax on whatever is remaining. Finally they have to bear the costs of the case on their own, such as accommodation and telephone bills, and not much money is left in their hands.”

Xu also gave an example of how he was denied payment by a client, even after winning the case—which was about denial of payment. In the case, he represented a private company that did a hydraulic project for the local administration but were not paid what they were owed. “They went to court and won the case, but still couldn’t get the money. I took the case and helped them. But this company decided to withhold my payment, and only paid me half.”

Intellectual property lawyer Zhou Binqing also explains how the dysfunction of the system has given rise to a new niche. “Nowadays, many lawyers cannot find good cases—those lucrative cases are monopolized by lawyers with [the right] background. There is a new breed of lawyers now in China called ‘source lawyers.’ Instead of handling specific cases, they work around their public relationships to bring cases to lawyers who work for them. Those lawyers who handle the cases earn a salary from the source lawyers.”