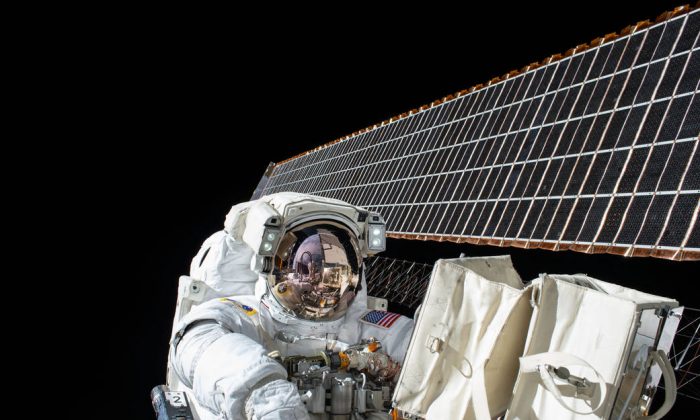 Nice night for a stroll: Scott Kelly working outside the International Space Station in 2015. (NASA)
Science

5 Things That Happen to Your Body in Space

Tim Peake is the first official British astronaut to walk in space. The former Army Air Corps officer has spent a month in space, after blasting off on a Russian Soyuz rocket to the International Space Station on Dec. 15 last year, but the spacewalk will doubtless be his most grueling test.

But what exactly will he be going through, during his remarkable spell aboard the space station? Space travel leads to many changes in the human body, many of which have been investigated since Yuri Gargarin made the first manned spaceflight in 1961—and an extensive team provides guidance and preparation for astronauts before, during and after any spaceflight. But if you’re planning an out-of-this-world trip, here are some of the things to expect.

The skeletal muscle system is the largest organ system of the human body. Hundreds of muscles are used for maintaining posture—sitting, standing—and performing a wide range of movements, with different loading conditions imposed by the forces of gravity on Earth.

Skeletal muscles have the ability to adapt to different purposes and the different loads placed on them, a quality known as plasticity. But like inactivity, space flight leads to loss of both skeletal muscle mass (atrophy) and strength.

During long spaceflights on the ISS, research found that 37 crew members experienced a decrease in mean isokinetic strength of between 8 percent and 17 percent. Men and women were similarly affected. In fact, this degradation occurs even when astronauts follow a strict exercise regime, meaning that it has profound implications for humans embarking on even longer journeys, such as to Mars. Data suggests that around 30 percent of muscle strength is lost after spending 110 to 237 days in microgravity.

2) So Does Your Heart

Many parts of the cardiovascular system (including the heart) are influenced by gravity. On Earth, for example, the veins in our legs work against gravity to get blood back to the heart. Without gravity, however, the heart and blood vessels change—and the longer the flight, the more severe the changes.

The size and shape of the heart, for example, changes with microgravity and the right and left ventricles decrease in mass. This may be because of a decrease in fluid volume (blood) and changes in myocardial mass. A human heart rate (number of beats per minute) is lower in space than on Earth, too. In fact, it has been found that the heart rate of individuals standing upright on the ISS is similar to their rate while lying down pre-flight on Earth. Blood pressure is also lower in space than on Earth.

This reduced blood flow to the muscles, combined with the loss of muscle mass, impacts aerobic capacity (below).

Aerobic capacity is a measure of aerobic fitness—the maximum amount of oxygen that the body can use during exercise. This can be measured by VO2max and VO2peak tests. Changes to both the muscles and cardiovascular system caused by spaceflight contribute to reduced aerobic fitness.

After nine to 14 days of spaceflight, for example, research shows that aerobic capacity (VO2peak) is reduced by 20 percent-25 percent. But the trends are interesting. During longer spells in space—say, five to six months—after the initial reduction in aerobic capacity, the body appears to compensate and the numbers begin improving—although they never return to pre-trip levels.

On Earth, the effects of gravity and mechanical loading are needed to maintain our bones. In space, this doesn’t happen. Bone normally undergoes continual remodeling and two types of cells are involved: osteoblasts (these make and regulate the bone matrix) and osteoclasts (these absorb bone matrix). During spaceflight, however, the balance of these two processes is altered which leads to reduced bone mineral density. Research shows that a 3.5 percent loss of bone occurs after 16 to 28 weeks of spaceflight, 97 percent of which is in weight-bearing bones, such as the pelvis and legs.

The immune system, which protects the body against disease, is also affected. There are a number of variables which contribute to this, including radiation, microgravity, stress, isolation and alterations in the circadian rhythm, the 24-hour cycle of sleep and wakefulness that we follow on Earth. Also, while in space, astronauts will interact with microbes from themselves, other crew members, their food, their environment and these can alter their immune response, which may lead to challenging situations and increase the potential for infections among the crew as well as contamination of extraterrestrial sites.

Naomi Brook is a lecturer in health & exercise sciences at the University of Stirling in the U.K. This article was previously published on The Conversation.