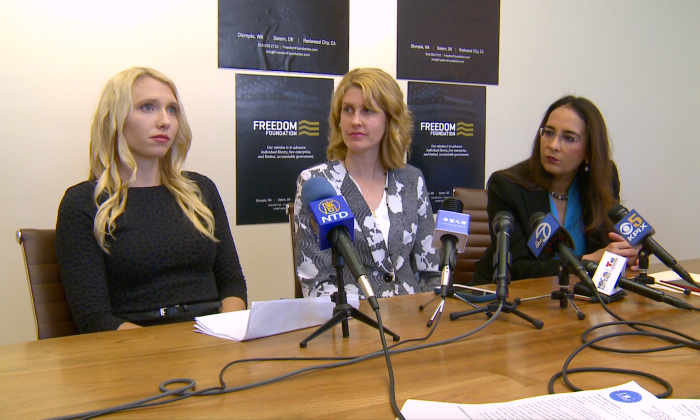 Five schoolteachers have filed a lawsuit against the California Teachers Association (CTA), one of the largest teachers’ unions in California politics.

During a press conference on March 11, Harmeet Dhillon, lawyer and founder of the Dhillon Law Group, stated that the unions must obtain “legally valid consent before deducting further union dues from plaintiffs’ paychecks and must also refund illegally obtained union dues from the past.”

The case stems from right-to-work laws, which are state laws that guarantee a person the ability to work without being compelled to join a labor union or pay union dues. Currently, 27 of 50 states have officially adopted right-to-work laws.

The role of a union representative is to represent the workers when negotiating issues, such as wages or other work needs, with company management. In this case, the plaintiffs had resigned from union membership but continued to have union dues deducted from their paychecks.

Dhillon explained that part of the legal issue rests with the fact that union representatives often use the money collected through union dues to carry out their own political agendas.

Reports have found that, between 2010 and 2016, labor unions gave over $1.1 billion to various liberal advocacy groups without prior approval from union members.

“The defendants’ conduct in this case is illegal, in line with the plaintiffs’ constitutional right of the First Amendment [of] the United States Constitution to not fund union political acts in which they disagree,” said Dhillon.

Additionally, the lawsuit states that union membership forms do not contain language that outlines a need to receive clear informed consent from members regarding union dues.

Dhillon said during the press conference that informed consent should make clear and transparent the following: (1) that union membership and fees are not a requirement of employment, (2) that the union representative should maintain fair representation regardless of union dues, and (3) that the union will use a portion of collected union dues to fund political lobbying.

Plaintiff Bethany Mendez noted that CTA, the union representing her and her coworkers, failed to be transparent and to provide this information to the union members.

Mendez mentioned the 2018 Janus v. AFSCME case, in which the Supreme Court ruled that collecting union fees from non-union members in the public sector is a violation of the First Amendment right to free speech.

“The employees were never informed of this [Janus case ruling], so I signed believing that there were no other options available to me and deduction would be made regardless,” said Mendez.

The focus of the case is not on the union itself, but rather on the union’s lack of transparency and honesty as well as its failing to abide by right-to-work laws.

Mariah Gondeiro-Watt, California Litigation Counsel with the Freedom Foundation, said: “The union has accepted the public employees’ opt-out request but are still holding them to a dues deduction authorization. The fact that the union is continuing to deduct dues, but [has] accepted their resignation [from union membership], shows that they are really only concerned about the money.”

Gondeiro-Watt said the Freedom Foundation also took on this case because the organization’s goal is to inform employees of their right to choose not to financially support a union if they so wish, which was established under the Supreme Court Janus case.

In 2018, plaintiff Mark Janus filed a lawsuit against the American Federation of State, County and Municipal Employees (AFSCME) in the case known as Janus v. AFSCME. This case ruled that the union fees in question were a violation of the First Amendment, overturning the Abood v. Detroit Board of Education case in 1977 that had previously approved of such fees.

Janus works for the state of Illinois, where government workers were unionized. Though states cannot compel workers to join a union, Illinois was one of 23 states that allowed unions to charge nonmembers, such as Janus.

In the other 27 states, right-to-work laws prohibit unions from charging nonmembers. Janus argued that Illinois violated his First Amendment rights by requiring union fees and compelling him to speak through a union.

Unions have defended the fees by arguing that nonmembers such as Janus still benefit from wage negotiation, job protection, and other benefits negotiated by the union on the workers’ behalf.

Siding with Janus, the Supreme Court imposed a right-to-work rule on public-sector unions in the 23 states that don’t have the law.

Because jobs in education are part of the public sector, teachers are protected by the right-to-work laws.