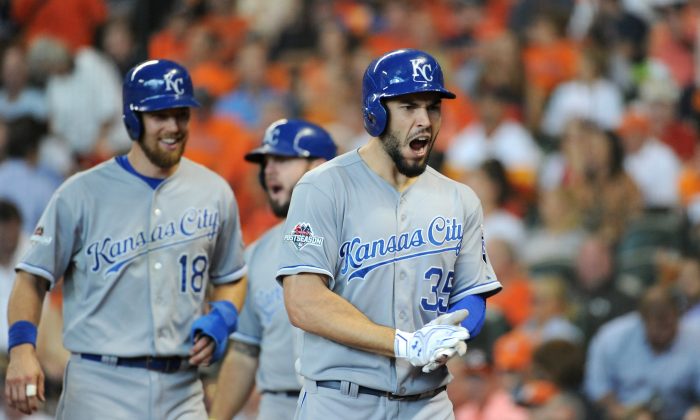 Five Memorable Postseason Series That Turned On a Dime

Few games have turned like the Game 4 ALDS classic Monday between Houston and Kansas City.

The Astros, up 2–1 in the series, broke open a 3–2 game with a three-run seventh that looked like it would all but clinch the series. Kansas City had just two hits to that point and with a raucous crowd on their side, Houston was surely smelling a win.

Then something shocking happened.

The Royals opened the eighth with five straight singles, followed by a tough error on shortstop Carlos Correa to score a pair of runs and improbably tie the game at six. An RBI-groundout by Alex Gordon three batters later put Kansas City up 7–6 before the inning ended. Then in the ninth, Eric Hosmer’s two-run home run then added some insurance as closer Wade Davis shut the door over a stunned Astros team—and crowd—with a 9–6 win.

It’s another in a long line of shocking, series-turning moments that have made baseball’s postseason play so exciting. Here are the five biggest momentum-seizing plays since the advent of the wild card in 1994:

Cleveland won three of the first four games in this series, with Josh Beckett’s Game 1 win being the Red Sox only victory among the first four. Beckett would stave off elimination with a Game 5 gem, but the Red Sox would somehow have to win two more without their ace on the mound.

Meanwhile, free agent signee J.D. Drew—signed to a five-year, $70 million deal before the season began—had not had a great year as compared with his new $14 million a year salary. The multi-talented right fielder hit .270 with just 11 home runs in 140 games that year, so when he came to the plate in the first inning of Game 6 with the bases loaded and the score knotted at 0–0, hopes weren’t high among the Boston faithful.

But Drew delivered with a grand slam that broke open the game. The Red Sox would add a six-run third inning to give Curt Schilling a comfortable working margin and Boston would cruise to a 12–2 Game 6 win, followed by an 11–2 victory in Game 7.

The three-time defending champions were on the ropes in this one. Down 2–0 in this best-of-five set against Oakland and facing future Cy Young winner Barry Zito, the Yankees were clinging to a slim 1–0 lead in the seventh when Terrence Long doubled—with Jeremy Giambi on first—into the right field corner.

The slow-footed Giambi was waved home on the two-base hit and a good throw would have nailed him at the plate, but right fielder Shane Spencer missed both cutoff men with his offline throw.

Fortunately the Yankees had Derek Jeter to save the play, game, and series with one incredibly heads-up assist.

Jeter’s now iconic—never been seen before—play saw him track down the errant throw between first base and home and in one motion catch and flip the ball to waiting-catcher Jorge Posada who turned and tagged a non-sliding Giambi out at the plate, a fraction of a second before he touched home plate.

The Yankees—thanks to Jeter’s play—held on to win the game 1–0 and would win Games 4 and 5 to advance to the ALCS and eventually the World Series.

Twelve years ago, the Cubs’ World Series title drought was at 95 years and counting. But with a 3–0 eighth-inning lead at Chicago’s Wrigley Field in Game 6 of the NLCS against the Marlins—and a 3–2 lead in the series—they were five outs from clinching their first pennant since 1945.

In that decisive eighth frame, Florida’s Luis Castillo came to the plate with one out and a runner at second and fouled a pitch just into the stands between third baseband left field that outfielder Moises Alou was tracking.

Understand this: when Bartman interfered with Castillo’s foul ball and thus prevented a visibly angry Cubs outfielder Moises Alou from catching the ball for the second out, there were numerous fans around him reaching out their arms in an attempt to catch it too—unaware that Alou was in place, right below them, for the out. As it was, Bartman’s hands touched the ball, Alou flipped out on him in frustration, and suddenly the flood gates opened and the Marlins made an epic rally—and then some.

Castillo would eventually be walked, followed by an RBI single, an error, a 2-RBI double, an intentional walk, an RBI-sacrifice fly, another intentional walk, a bases-clearing double, another RBI single, and finally an inning-ending popup would take place before the inning would mercifully end. All told, eight runs crossed the plate, turning a 3–0 lead into an 8–3 deficit, from which the Cubs would never recover.

The Marlins, after the eight-run eighth, cruised to finish them off in Game 6 and then won Game 7—also in Chicago—9–6 to end the Cubs season.

There were probably a few turning points in Game 4 of this series. You could pick Dave Roberts’ ninth-inning steal or Bill Mueller’s ensuing single that drove him in to tie the game off of Mariano Rivera as possible series-changing moments, but neither play actually put them ahead. But when Ortiz hit the two-run shot in the bottom of the 12th to win it, confidence was restored to a badly-beaten Red Sox team.

The Yankees, who had outlasted Boston the year before in a thrilling seven-game ALCS—thanks to Aaron Boone’s walkoff home run in Game 7—had taken it to the Red Sox in the first three games of their 2004 series outscoring Boston by a total of 32–16.

No team had ever come back from a 3–0 deficit in a best-of-seven set, but Ortiz’s dramatics in Game 4, followed by another walkoff hit from Big Papi in Game 5, turned around a series that Boston would improbably win in seven games.

NLDS Previews: Why the Mets, Cubs Will Advance

The defending-champion Braves were on a roll. Atlanta had won the final three games of the NLCS over St. Louis by a combined score of 32–1 and then had soundly beaten the Yankees 12–1 and 4–0 in the first two games of the World Series—at Yankee Stadium—to take a 2–0 series lead.

Even after the Yankees stopped the bleeding with a 5–2 win in Game 3, Atlanta had them right where they wanted them in Game 4—up 6–0 after five innings.

But the Yankees chased starter Denny Neagle with a three-run sixth to cut the lead in half.

Then in the eighth, Braves manager brought in hard-throwing closer Mark Wohlers to get the six-out save.

The inning would start off innocently enough.

Charlie Hayes led off with a slow dribbler that hugged the third-base line—that the Braves thought would eventually roll foul. Miraculously it didn’t and Hayes made it to first with an infield single. Darryl Strawberry then hit a line drive through the left side for another hit.

With two on and none out, Mariano Duncan hit a surefire double-play ball to short, but Rafael Belliard booted it and Braves only got one out, which brought backup catcher Jim Leyritz to the plate with two on and one out.

With the count at 2-2, Leyritz crushed Wohlers’ slider over the left field wall to suddenly tie the once-thought out-of-reach game and in effect stun the Braves. New York added two in the 10th to win it and tie the series at two games apiece.

The Braves would never lead in the World Series again as the Yankees won a pair of tight contests in Games 5 and 6, 1–0 and 3–2 to clinch the title.