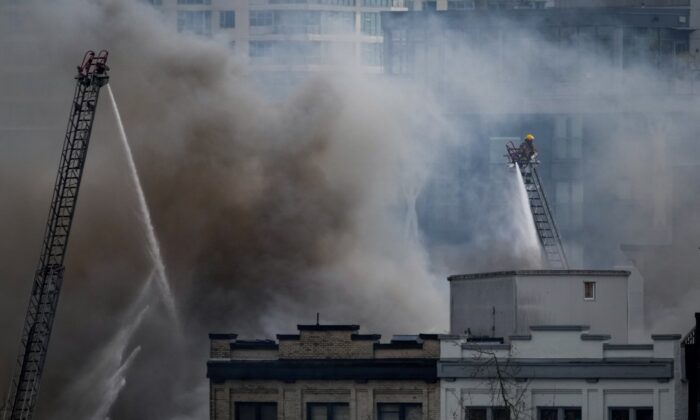 A firefighter on a ladder truck directs water on a four-alarm fire burning at a single room occupancy hotel in Vancouver, April 11, 2022. (The Canadian Press/Darryl Dyck)
Canada

Five People in Hospital After Fire in Residential Building in Vancouver: Chief

Five people were taken to hospital and officials were trying to account for everyone who lived in a building that caught fire Monday in Vancouver’s Gastown neighbourhood.

Officials didn’t know the status of all the residents of the four-storey building and they were looking for “upwards of a handful,” said fire Chief Karen Fry, adding people could have been out or scattered after fleeing the flames.

BC Emergency Health Services said five people were taken to hospital and paramedics treated others for minor injuries at the scene. It says two of those who were hospitalized were in serious condition and the other three were in stable condition.

Fry said paramedics told her one person was injured while jumping from an upper floor as firefighters were arriving and another woman was hospitalized after being rescued from the second floor about an hour into the blaze.

Firefighters used a ladder truck to rescue others from upper floors, which were engulfed in smoke and flame at the time, the chief said.

The fire appears to have started on the third or fourth floor, but officials won’t know the cause until an investigation is complete, Fry said.

An update Monday evening from Vancouver Fire and Rescue Services said 60 firefighters were at the scene, and crews were expected to remain there overnight.

Fry said fire crews were called around 11 a.m. and found flames and heavy smoke coming from the building, which contains single-room housing. It was home to vulnerable residents in the city’s Downtown Eastside and housing will need to be arranged for those who were displaced, she said.

By mid-afternoon, Fry said part of the roof had collapsed. Crews were attacking the fire from all sides to prevent it spreading to neighbouring buildings, she said.

Public Safety Minister Mike Farnworth told a separate news conference on Monday that an estimated 70 residents were affected, and a reception centre was being established for those who need support.

Fry said the building had recently been inspected and it had a sprinkler system, but she didn’t know if it was working when the fire broke out.

Smoke that drifted across downtown from the fire was toxic and should be avoided, she added.

The building is one of the area’s oldest, Fry said, and it likely had a wooden frame with a brick facade that was crumbling in parts.

“Once (the fire) gets into the membrane of the building or the outer walls and into the roof, it’s really difficult, it’s like you’re chasing it, chasing the fire.”

The update Monday evening from Vancouver Fire and Rescue Services noted surrounding buildings were also evacuated and officials on scene were assessing what locations are safe to return to for residents.