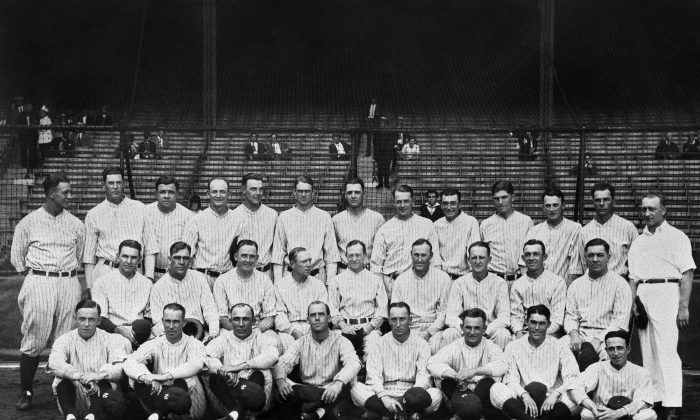 The 1927 New York Yankees, often mentioned in the same breath with "one of the best teams of all time." Lou Gehrig and Babe Ruth are, respectively, first and third from left in the back row. Manager Miller Huggins is at center, middle row. The batting order, better known as Murderers' Row, led nearly every offensive category in the league. The team finished at 110-44 (.714), 19 games ahead of the second-place Philadelphia Athletics. (AP Photo)
12- OBSOLETE

There is always the debate among baseball aficionados, experts, fans—what was the greatest baseball team of all time?

Perhaps after reading this new edition of Five O’Clock Lightning, you will have the definitive answer, the 1927 New York Yankees.

When Yankee owner Colonel Ruppert’s “Rough Riders,” as some called them, were not going head to head against their American League competition, they were playing exhibition games in Buffalo, Omaha, Rochester, Columbus, Dayton, Indianapolis, all kinds of places.

Everyone in the little cities and small towns wanted to catch a glimpse of the Babe, Lou and the others. Wherever the Yankees went, there were always packed ballparks and playing fields. The team was a magnet, a syncopated jazz band playing a baseball song with the Babe leading, striking up the band with his home run baton, his bat. Whole towns came out early and they stayed late studying the moves of “the Colossus of Baseball.” How the Sultan of Swat walked, how he ran, how he swung a bat, how he caught and threw a baseball, how he joked and wrestled with kids in the fields of play, how many different kinds of home runs he hit. Demand for the Yankees came from all over.

In Omaha, Nebraska, the King of Clouts, Ruth, and his protégé the “Prince of Pounders,” Gehrig seemed genuinely happy to make the acquaintance of one “Lady Amco” who was known as the “Babe Ruth of chickens.” She was a world champ at laying eggs. The morning the Babe and the Buster met her she produced on cue, laying an egg for the 171st straight day.

In Indianapolis, the Sultan of Swat failed to homer or even swat the ball out of the infield in his first three times at bats. Each time the smattering of boos and heckling became louder, all good-natured, of course. According to reports, Ruth in his fourth at bat tagged the ball, and it leaped over the fence in right field into the street bouncing into box cars in a nearby freight yard. That was the story.

And its punch line: “I guess I did show those people something, make fun of me, will they,” the Big Bam boomed going into the dugout.

In a dilapidated park in Ft. Wayne, Indiana before 35,000 against the Lincoln Lifes, a semi-pro team, the scene was all too familiar. Hundreds of kids screamed, ached to ogle, to get an autograph or just to be close to George Herman Ruth, their idol.

The Bambino, to save his legs, played first base, as was his custom many times during those exhibition games. Gehrig played right field. Going into the tenth inning, the score was tied, 3-3. Mike Gazella was on first base when Ruth stepped into the batter’s box. Always the showman, signaling to the crowd that they might as well start going home, the Big Bam poked the ball over the right field fence giving the Yankees a 5-3 win. Hundreds of boys who had been relatively controlled and contained mobbed their idol as he crossed home plate. It took quite a while before Ruth and the Yankees could clear out of the park.

Wherever the exhibition games were staged, overflow crowds sat in the outfield watching the action. Attendance records were broken. Mobs cheered. They roared and howled and jumped to their feet, marveling at the power and magic of the mighty Yankees and especially George Herman Ruth. “God, we liked that big son of a bitch. He was a constant source of joy, Waite Hoyt said. “I’ve seen them kids, men, women, worshipers all, hoping to get his name on a torn, dirty piece of paper, or hoping for a grunt of recognition when they said, ‘Hi-ya, Babe.’

He never let them down; not once. He was the greatest crowd-pleaser of them all. In a game played at Sing-Sing, New York against the prison team, Ruth slugged a batting practice home run over the right field wall and then another over the center field wall. “I’d love to be riding out of here on those balls,” one of the prisoners joked. During the game the Sultan of Swat turned to the crowd of cons in the stands and bellowed in that big booming baritone voice of his: “What time is it?” Many of the cons shouted back the answer.

“What difference does it make?” the showman Ruth yelled. “You guys ain’t going anyplace, any time soon.”

The Yankees were going anyplace they could play baseball. On May 26 they were at West Point. Entering the Mess Hall at noon to dine with the Cadets for lunch, the team from the Bronx received a standing and enthusiastic ovation from the 1,200 West Pointers. Before the baseball exhibition game began at West Stadium, “Jidge” Ruth presented members of the Army nine with autographed baseballs and a specially autographed baseball to the leading ball player of each of the twelve companies.

The Yankees used virtually their regular lineup except that Ruth and Gehrig switched places in the field. Earle Combs walked to start the game. Mark Koenig singled. Babe Ruth was struck out by Army pitcher Tim Timberlake and that got a mighty rise from the Cadets.

James Harrison later described the scene in The New York Times: “‘Aw, he didn’t try to hit the ball,’ said one of the cadets. ‘He was just trying to make us feel good.’ “However, the truth of the matter was that the Big Bam was so eager to hit a homer for the Hudson folks that he went after bad balls which he couldn’t have reached on a stepladder.

No matter. A good time was being had by all until lightning, thunder, and a soaking rain brought the festivities to a quick conclusion after just two innings. The Yanks, as usual, won another, 2–0. It was said that the Babe got a big kick playing in exhibition games. It was said that he liked that time to show off his skills, play without pressure, and have fun. That was what was said. But there was also the unpublicized financial benefit. At the beginning of his participation in exhibitions gigs, Ruth received 10 percent of the gate receipts. That arrangement ballooned later to a guaranteed $2,500 against 15 percent of gate receipts.

The ’27 New York Yanks were the greatest baseball team of all time. Read on in the book and find out why.