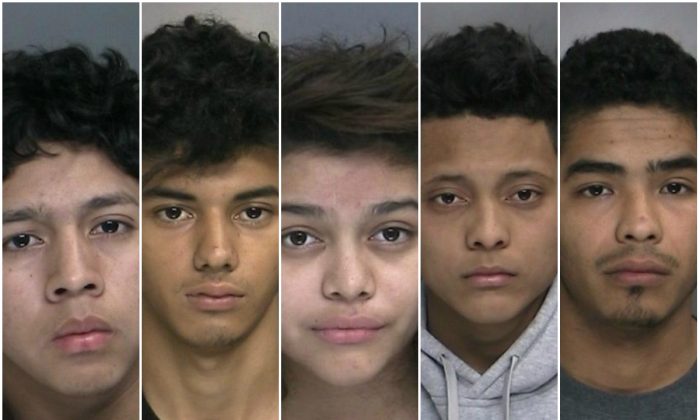 The five MS-13 gang members and associates arrested and charged with conspiracy in the second degree on Long Island, N.Y., on Dec. 6, 2017. (Suffolk County Police Department)
Crime and Incidents

The five are charged with conspiracy in the second degree after allegedly trying to abduct and murder a 16-year-old male.

All five are illegal aliens from El Salvador, with three having entered the United States as unaccompanied minors, according to the Suffolk County Police Department.

The attempted abduction occurred in Brentwood, a community on Long Island that has been beleaguered by MS-13 gang violence.

Suffolk County Police Commissioner Timothy Sini said police received complaints on the morning of Dec. 6 that three to four Hispanic males in a van were approaching young, Hispanic boys and harassing them.

That same afternoon, near Brentwood High School, detectives observed a van load of five individuals approach and attempt to coerce a 16-year-old boy into the van.

“It’s those detectives that foiled the plot to kill a 16-year-old boy,” said Sini.

“We remain committed to doing everything in our power to eradicate MS-13 from our communities. We’ve made over 300 MS-13 arrests, and this is the latest of that effort.”

In September 2016, two teenage girls from Brentwood High School were murdered with baseball bats and machetes by MS-13 members.

And in April this year, four young men were slaughtered in a wooded park in neighboring Central Islip.

MS-13, or Mara Salvatrucha, is known for its violence and has been targeted for elimination by the Trump administration.

Most MS-13 members hail from El Salvador, and the vast majority are in the United States illegally. Gang members use the unaccompanied minor program as a recruiting pipeline into the United States.

Children under 18 who cross the border illegally into the United States usually seek out Border Patrol so that they can get processed and sent to the Office of Refugee Resettlement, which is part of Health and Human Services.

The minor is then placed with a sponsor, who is often a parent or relative who is already in the United States illegally.

Often, minors who are not part of MS-13 when they enter the United States become prime targets for recruitment into the gang, especially if they have family members back home that gang members can threaten.

“We’re working with the Department of Homeland Security to target MS-13 gang members who are here illegally, to detain them and to commence removal proceedings,” Sini said. More than 100 MS-13 gang members have been detained for deportation, in collaboration with the police department.

“We’re investing heavily in prevention and intervention programs so that we can protect our most vulnerable and prevent children from going down this destructive path.

“Let me be very clear: The Suffolk County Police Department remains committed to our ultimate mission, which is eradicating MS-13 from our communities.”

The five individuals arrested and charged on Dec. 6: