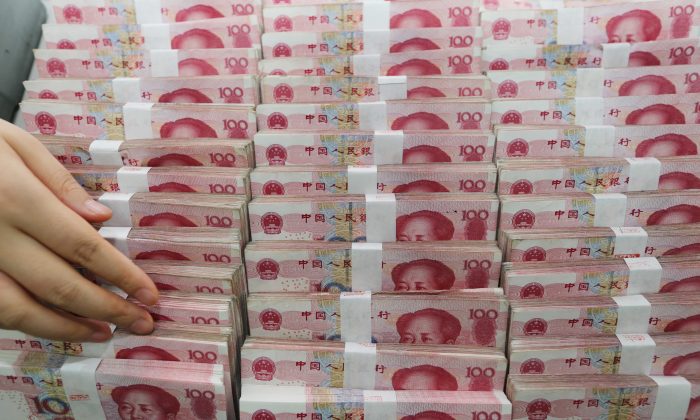 A teller counts yuan banknotes in a bank in Lianyungang, East China's Jiangsu province on August 11, 2015. Donald Trump and his advisors have for a long time accused China to be an unfair trader and currency manipulator. (STR/AFP/Getty Image)
China

The People’s Bank of China decided on September 23 to further tweak the management of the trading prices in the inter-bank foreign exchange market and quotes of foreign exchange designated banks. A spokesperson of the People’s Bank of China explained in detail, on September 25, the five major changes in its policies on the exchange rate of the renminbi (RMB), the Chinese unit of currency.    On September 25, Xinua.Net posted the following five points concerning the RMB:

1. Widening the band of RMB exchange rates in the spot market against non-USD currencies (such as the Euro, Yen, HK dollar), from the previous level of ±1.5 percent to ±3 percent.

5. Strengthening the supervision of exchange quotations. Banks are required to strengthen the system of managing exchange quotations, as well as unifying the management in their branches and sub-branches. Banks are also required to report by 9 a.m. each day to the State Administration of Foreign Exchange (SAFE) their major currency quotes, including opening, high, low, and closing prices for the previous day, as well as opening price for the day. At the same time, every level of the SAFE is required to strengthen the supervision and management to maintain the order of the currency market.