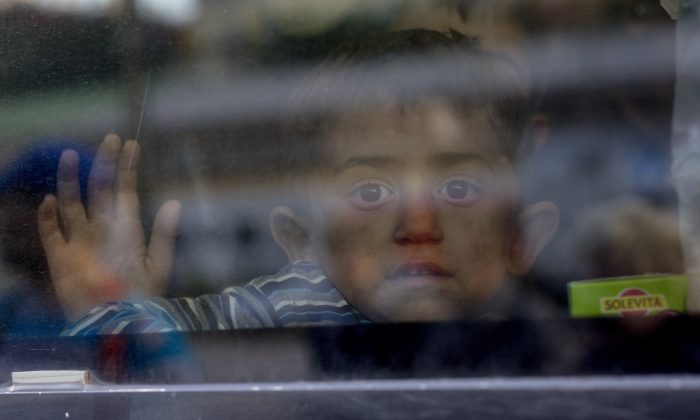 A refugee children waves goodbye, from a train going to Munich, to volunteers who helped them at Vienna's Westbahnhof train station in Vienna, Austria, Sept. 6, 2015. Thousands of migrants and refugees have transited from Hungary via Vienna where they were welcomed and helped by volunteers in the last couple of days. (Joe Klamar/AFP/Getty Images)
Opinion

In the wake of civil war in Syria, the rise of the Islamic State (ISIS), an Islamist ascendancy in Libya, and a series of conflicts in the Middle East, North and East Africa, hundreds of thousands of people have made their way to Europe, seeking asylum as refugees.

Some of those fleeing war zones and trouble spots are genuine refugees, while others are economic migrants seeking to escape poverty and destitution.

The vast majority of those seeking a new life in Europe are Muslims fleeing from Muslim countries. After making their way to southern Europe (including the Balkans, Greece, and Italy), most of the migrants are attempting to reach wealthier nations in northern Europe, including Germany, Austria, Sweden, and Great Britain.

The huge migration is leading to intense political debate across the 28-member European Union, and could have major implications for the future of EU.

Here are five key points regarding the growing crisis across the Atlantic.

1. President Obama’s Middle East policy has been a disaster.

Europe’s refugee crisis cannot be separated from the broader failure of Obama’s disastrous approach to the Middle East. Four million Syrians have been forced to flee their country after years of civil war, and the relentless rise of ISIS.

The Obama administration’s complete lack of a strategy in dealing with the Syrian issue has allowed the brutal regime of Bashar al-Assad to remain in power, while ISIS has grown in strength at the same time.

As former U.K. Defense Secretary Liam Fox made clear in an address to the Heritage Foundation last week, there will be no end to the European migrant crisis until ISIS is defeated, and the Syria situation is resolved.

U.S. leadership matters in the world, and at present there is very little of it.

2. European unity is an illusion.

The idea that the European Union is united in the face of the refugee crisis is an illusion.

Europe is deeply divided between countries such as Germany, which has pledged to welcome all refugees fleeing from Syria; and Hungary, which has vowed not to accept migrants.

There is a deep division between Berlin, Paris, and the European Commission on one side, and several countries in Eastern and Central Europe, who are opposed to the European Union dictating the terms of the refugee issue.

The European Union has always been at heart a political project, one that is heavily splintered today over the refugee crisis.

Despite lofty rhetoric from Brussels, Europe’s refugee crisis is likely to be handled at the nation state level, and not by edicts from the European Union.

Overtime, it is inevitable that there will be a return to border controls in continental Europe, with European governments seeking to reassert authority over their own borders.

The British government has agreed to take 20,000 refugees from Syria, but has made it clear that accepting more refugees is not a long-term solution to the problem, and has strongly opposed having quotas of refugees imposed by the European Union upon individual European countries.

There can be little doubt that Europe’s vast and generous welfare and entitlement systems are a significant attraction for many people seeking to escape poverty in Africa, Asia, and the Middle East and live within the European Union.

The addition of hundreds of thousands of migrants, and possibly millions more in the years to come, will lead to a huge strain on welfare resources in European countries.

Germany, for example, following the pledges made by Chancellor Angela Merkel, will be compelled to provide housing and schooling for large numbers of non-German speakers.

Germany has agreed to take in around 800,000 asylum seekers from Syria. There will also be the issue of integrating a multitude of new immigrants into European cities that are already facing tremendous challenges in terms of assimilation.

5. Many Gulf Arab states are not sharing the burden.

As tens of thousands of refugees make their way to Europe, it is important to point out that the countries of the Gulf Cooperation Council (Saudi Arabia, Bahrain, Qatar, United Arab Emirates, Oman, and Kuwait) have not opened their doors to those displaced by the fighting in Syria.

For example, Jordan has taken more than 630,000 refugees but only has a per capita income of $11,000. But Qatar, that has a per capita income of $143,000, has not taken any refuges from Syria. This is a reflection of the Gulf Cooperation Council’s broader attitude toward the fight against ISIS in Syria and Iraq, which is one of reluctance to get involved in any meaningful way.

Nile Gardiner, a leading authority on trans-Atlantic relations, is the director of The Heritage Foundation’s Margaret Thatcher Center for Freedom. Luke Coffey studies and writes on trans-Atlantic relations as a Margaret Thatcher Fellow at The Heritage Foundation. He focuses on defense and security matters, including the role of NATO and the European Union in transatlantic and Eurasian security. Copyright The Daily Signal. This article was previously published on DailySignal.com