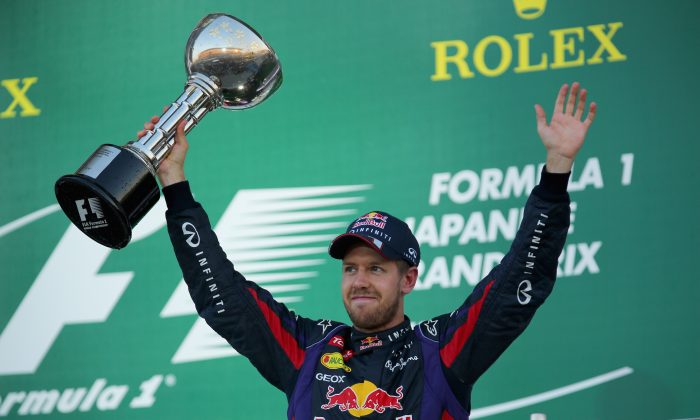 Sebastian Vettel of Red Bull Racing celebrates on the podium after winning the Formula One Japanese Grand Prix at Suzuka Circuit on October 13, 2013 in Suzuka, Japan. (Clive Rose/Getty Images)
Motorsports

Red Bull’s Sebastian Vettel continued his winning streak and closed in on a fourth World Championship by finishing first at the Formula One Japanese Grand Prix Sunday morning.

The three-time world champion started second, avoided serious damage after being hit by Lewis Hamilton’s Mercedes on the start, and took advantage of fresher tires to take the virtual lead from Lotus driver Romain Grosjean on lap 40 of the 53-lap race.

It was Vettel’s fourth straight win at Japan’s Suzuka circuit.

Obviously, I’m blown away with today’s race,” Vettel said after the race on NBCSN. “I had a very, very poor start. I think it was right between Romain [Grosjean] and Lewis [Hamilton] and I clipped a little bit the front wing. I think Lewis had a puncture after that. I couldn’t go anywhere.

“After that we were patient, looked after the tires and had incredible pace towards the end. So we managed to get past Romain, beat Mark on another strategy so, all in all, fantastic. I’m so overwhelmed every time we come here. Thank you very much again for the support.”

Vettel qualified second after KERS problems cost him his fastest lap; Mark Webber won the pole. Both were beat of the line by Romain Grosjean who came from fourth to take the lead, and Lewis Hamilton who started third, but cut a tire while cutting across Vettel. Hamilton had to pit on lap two, then retired on lap ten with overheating brakes, probably caused by lost aero efficiency due to accident damage.

Passing at Suzuka is notoriously difficult, which made tire strategy the best way to gain ground. Webber was called in on lap 11—earlier than expected—while Grosjean pitted on lap 12 and Vettel on lap 14.

Webber was called in again on lap 26, as apparently red Bull decided to switch Webber to a three-stop strategy. Grosjean pitted on lap 30 while Vettel stayed out until lap 38, losing some time but shortening his final stint.

Vettel came out third, right behind Grosjean, and the red Bull driver took advantage of his fresher rubber to get by. Webber pitted again on lap 42, giving the race lead to Vettel, who managed the gap until the end.

Webber made the most of his fresh tires, but still couldn’t get by Grosjean until lap 52, which didn’t leave enough time to chase down his team mate.

To some it might seem that Webber was sacrificed so that Vettel could get the win. Even Webber was surprised when he was called in early.

“I was a little bit surprised,” Webber told the post-race press conference. “I asked was it the right thing to do because I felt we could get to the lap we were looking to get to. Of course Seb was two or three laps longer, four laps maybe but in terms of the target lap that we looked to get for the two-stop I thought was achievable.

“In the end Seb did a good race, the strategy worked out perfect and yeah, the three was … not absolutely ridiculous but it’s a bit more high risk.”

The win is the ninth of the season and the 35th of Vettel’s career, and extended the young star’s points lead over Ferrari’s Fernando Alonso to 90 with four races—worth 100 points—left on the schedule. Vettel would have to fail to finish three of the remaining four races, while Alonso won each of them, and still Vettel would have a solid lead heading into the final race in Brazil.

It is almost impossible that Vettel will not to win his fourth consecutive championship, something done only by legends Juan Manuel Fangio and Michael Schumacher—and Vettel would be the youngest driver to win four in a row by ten years. Schumacher’s record of seven career titles is most certainly at risk.