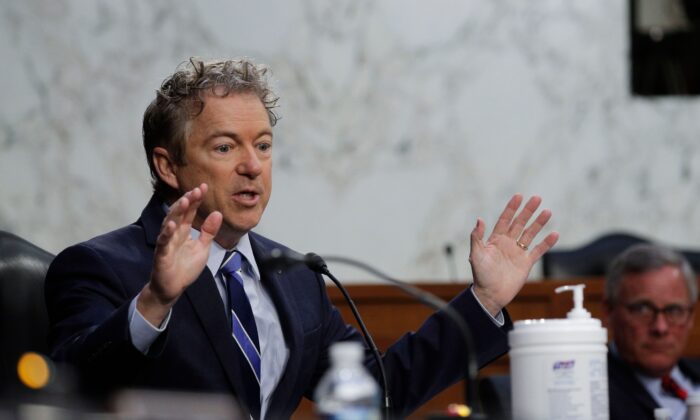 Five Republican senators have asked National Institutes of Health (NIH) Acting Director Lawrence Tabak for a comprehensive accounting of every royalty payment by an outside source to an employee of the federal agency since 2009.

“We believe that the American taxpayer deserves to know 1) the degree to which government doctors and researchers have a financial interest in drugs and products they support, and 2) whether any relationship exists between federal grants awarded by NIH and royalty payments received by NIH personnel,” the senators told Tabak in a letter that was made public on June 1.

“Additionally, Americans deserve greater transparency in how the hundreds of millions in royalty payments NIH receives are distributed, and the degree to which NIH’s leadership—already among the highest-paid individuals in the federal bureaucracy—has benefited from this ‘hidden’ revenue stream.”

The five senators are Rand Paul of Kentucky, James Lankford of Oklahoma, Josh Hawley of Missouri, Ron Johnson of Wisconsin, and Rick Scott of Florida. Tabak has been acting NIH chief since his predecessor, Dr. Francis Collins, resigned in December after leading the agency for a dozen years.

The GOP senators’ letter was prompted by revelations first reported by The Epoch Times based on information obtained via the Freedom of Information Act (FOIA) submitted to NIH by Open the Books, an Illinois-based nonprofit government watchdog.

“We estimate that up to $350 million in royalties from third parties were paid to NIH scientists during the fiscal years between 2010 and 2020,” Open the Books CEO Adam Andrzejewski said in a telephone news conference on May 9.

“We draw that conclusion because, in the first five years, there has been $134 million that we have been able to quantify of top-line numbers that flowed from third-party payers—meaning pharmaceutical companies or other payers—to NIH scientists.”

“We now know that there are 1,675 scientists that received payments during that period, at least one payment. In fiscal year 2014, for instance, $36 million was paid out and that is on average $21,100 per scientist,” he said.

Collins received 14 payments while serving as NIH director, according to the information obtained by Open the Books. Dr. Anthony Fauci received 23 payments, and his deputy, Clifford Lane, got eight payments during the period.

Tabak conceded during a recent congressional hearing that the payments “have the appearance of a conflict of interest.” Republicans have since been vocal in demanding that NIH be more forthcoming about the royalty payments, while Democrats have been unusually quiet.

Open the Books received the data on the royalty payments only after suing in federal court, and even then, the information provided was heavily redacted so that the specific amounts of individual payments to recipients and the names of payers were concealed.

The GOP senators took note of that fact in their letter to Tabak.

“Each year, NIH awards tens of billions of dollars in the form of federal grants, and under 401.10 of the Patent and Trademark Law Amendments (Bayh–Dole) Act, federal agencies and employees may receive royalty payments for products and inventions when listed as an inventor or ‘co-inventor’ on a product’s patent,” the senators told Tabak.

“A 2020 study conducted by the Government Accountability Office (GAO) showed that, in total, 93 NIH patents contributed to 34 FDA-approved prescription drugs, generating roughly $2 billion in royalty payments to the agency between 1991-2019. In 2004 alone, some 900 NIH scientists earned approximately $8.9 million in royalties for drugs and inventions they discovered while working for the government.”

The senators said NIH has in the past been substantially more transparent about the payments.

“In 2005, the National Institutes of Health (NIH) implemented a policy requiring its employees to disclose these royalty payments on the consent forms for clinical trial participants; however, the agency has taken no action to disclose such payments to the public at large,” the letter states.

“In fact, even after the nonprofit organization Open the Books submitted a Freedom of Information Act (FOIA) request to disclose royalty payments made between 2009 and 2020, the agency only provided the names of the employees receiving the payments and the number of payments they received between 2009 and 2014; the amounts of the individual payments, the innovation in question, and the names of the third-party payers were redacted by NIH.”

Andrzejewski told The Epoch Times on May 31 that his nonprofit shouldn’t have had to take NIH to court to get the information the five senators are now demanding.

“The production of an estimated $350 million in third-party royalty payments to NIH and 1,700 of its scientists is so heavily redacted that it’s nearly impossible to follow the money. NIH is violating the spirit if not the letter of open records law,” Andrzejewski said.

“It shouldn’t take our lawsuit or congressional action to force NIH to comply with basic open government rules. We applaud the actions of the senators on the Homeland Security committee as they remind these unelected career bureaucrats that they work on behalf of the American people.”