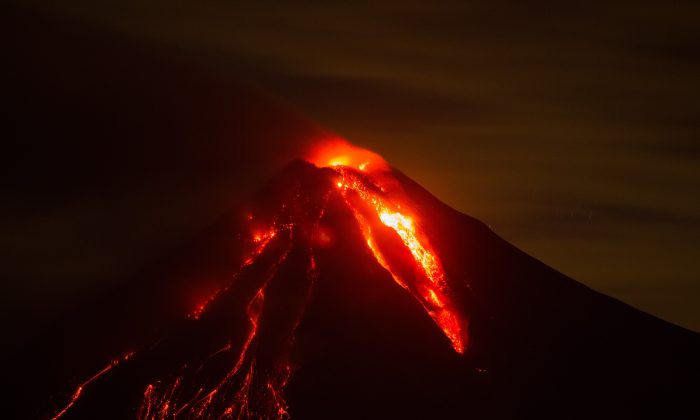 It is an awe-inspiring and terrifying sight, a volcano spewing lava and millions of tons of ash and rock into a blackened sky. Mexico’s “fire volcano,” Mount Colima, recently began erupting … again, a reminder of the spectacularly destructive forces that can be unleashed by nature.

But dramatic as online footage of this Mexican volcano is, the eruption is a mere trifle compared to some of the little-known natural disasters that have been predicted. From supervolcanoes to towering megatsunamis, these catastrophic events could affect millions—and occur sooner than you think.

The threat posed to the world by the Yellowstone supervolcano in the United States is well documented. Less well-known (or acknowledged), however, is that it is just one of many posing a catastrophic threat to the planet.

The Lake Toba supervolcano, on the Indonesian island of Sumatra, is currently home to the largest volcanic lake on Earth, formed 74,000 years ago when it last blew, in the biggest eruption for 25 million years. It is estimated that around 2,800 cubic kilometers (670 cubic miles) of volcanic ash and lava were thrown into the atmosphere, 12 percent more than was ejected by the last Yellowstone eruption of 2.2 million years ago.

And it may be about to erupt again. As with any super-eruption, the vast quantities of ash and sulphur dioxide produced can have a devastating effect on the global climate. But a number of factors make the prospect of a Toba super-eruption much more intimidating than one at Yellowstone.

Toba is located on the densely populated island of Sumatra, home to over 50 million vulnerable people, and is only 25 miles (40 km) from the Indian Ocean in which catastrophic tsunamis (of which we have recent experience) would certainly be generated. Additionally, in recent months, reports of volcanic gases and heating of the ground surface have led to suggestions that the sleeping giant may again be waking up.

Forget the widely publicized megatsunami threat that has been attributed to the potential collapse of the Cumbre Vieja volcano on La Palma in the Canary Islands. A far greater danger is posed by the possible collapse of the southern portion of Kilauea Volcano on the Big Island of Hawaii. Termed the Hilina Slump, this could drop 12,000 cubic kilometers (2,880 cubic miles) of rock into the Pacific Ocean, generating a megatsunami that would propagate around the Pacific Ocean and reach the western seaboard of North America in a matter of hours, inundating coastal communities.

There is evidence that a similar collapse at nearby Mauna Loa around 120,000 years ago generated a tsunami with a run-up height of over 400m (2 tenths of a mile). Even as recently as 1975, movement of the Hilina Slump generated a smaller, yet destructive tsunami that reached California. Given that the slump is continually active and moving, it might only take a jolt from an earthquake in the tectonically active state to set in motion this catastrophic chain of events.

The North Sea may seem an unlikely place for a devastating tsunami, but climate change has led to concern that a submarine landslide in the region might lead to just this.

There is a precedent. Scientists have suggested that over 6,000 years ago, a sharp sea-level rise, attributed to a changing climate and a rapid melting of ice, added weight to the submarine glacial deposits at the edge of the Norwegian continental shelf, destabilizing them and causing a 300km (186 miles) long landslide. This generated a tsunami that reached heights of up to 20 meters (66 feet) in the Shetland Islands, ten (32 feet) on the Norwegian coast and six meters (19 feet) off the northern and western coast of Scotland.

Should Earth experience such a rapidly warming climate again, and experience the associated melting of the Greenland and/or West Antarctic ice sheets, a similar event might well be possible which, today, would affect the coastal populations of Scotland and Norway (around 3 million)—and perhaps even London.

The rate of movement of the ocean floor here is currently just 40mm (1.6 inches) a year but the upper part of the system is currently stuck, meaning that the North American plate is being compressed. At some point, the pressure being built up has to be released and this will be in the form of a massive earthquake, perhaps up to a magnitude 9. This could cause subsidence of the coastal region of up to 2m (6.6 feet) and a possible horizontal displacement of 30m (about 100 feet).

Shortly after the intense shaking subsides, the riling coastal community will be struck by a tsunami that could dwarf that of the 2011 Japanese wave. Around 7 million people live in this region, from Vancouver, through Seattle, to Tacoma and Portland.

How feasible is it? Well scientists have calculated that in the last 10,000 years, the region has suffered 41 large earthquakes, occurring with an average interval of 244 years—the last was a magnitude 9 and that was 315 years ago.

Perhaps the biggest threat to the modern world is posed by our own star. Periodically, the sun emits a solar flare, an intense cloud of energetic photons and particles with the energy of millions of hydrogen bombs exploding at once. Once released, these clouds arrive at Earth’s upper atmosphere within a day or two and, in many cases, most ordinary people on Earth would be none the wiser.

If intense enough, however, a solar storm could devastate electrical systems both in orbit, for example, satellites, and on the ground, as the energetic electrons cause a charge build-up.

One of the largest known events was in 1921, which knocked out the U.S. telegraph service. But scientists have calculated that should a similar event happen in today’s technology-reliant society, it could knock out many satellite systems, disabling global communications, the Internet, and the global positioning system. Chaos could ensue.

The intensity of solar flares varies on a roughly 11-year cycle and fortunately, 2014 saw the most recent peak come and go without significant impact. We can only hope that the same can be said for the future.