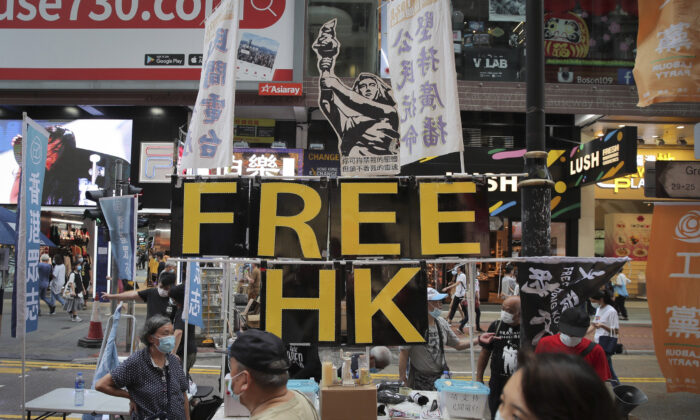 A booth with sign "Free Hong Kong" is set up near Victoria Park where people gather to mourn those killed in the 1989 Tiananmen crackdown in Causeway Bay, Hong Kong on June 4, 2020. (Kin Cheung/The Associated Press)
Australia

The allied Foreign Ministers of Australia, Canada, New Zealand, and the UK, as well as the U.S. Secretary of State Mike Pompeo, have condemned the Chinese Communist Party’s (CCP) actions in Hong Kong in a rare joint statement published Thursday.

The Five Eyes foreign representatives declared that Beijing was running a “concerted campaign to silence all critical voices” in Hong Kong and that the CCP had breached the legally binding Sino-British Joint Declaration for the third time when it disqualified elected legislators in Hong Kong last week.

The communist regime had previously breached the Joint Declaration, the allies said, with the imposition of the national security law and its postponement of the Legislative Council elections in September.

“China’s action is a clear breach of its international obligations,” the statement said.

“The disqualification rules appear part of a concerted campaign to silence all critical voices following the postponement of September’s Legislative Council elections, the imposition of charges against a number of elected legislators, and actions to undermine the freedom of Hong Kong’s vibrant media,” they said.

Calling on the Chinese regime to stop undermining its binding commitment that Hong Kong would enjoy a “high degree of autonomy” and the right to free speech, the ministers said that for the sake of Hong Kong’s stability and prosperity, the Chinese regime needs to respect the channels for the people of Hong Kong to express their legitimate concerns and opinions.

The publication of the statement by the Five Eyes nations comes after an unofficial list of the CCP’s grievances with Australia were leaked from the Chinese Embassy in Canberra to The Sydney Morning Herald, The Age, and the Nine Network.

The Nine Network, which obtained a copy of the list, said it allegedly contained 14 complaints from China, including Australia’s ban on Huawei from the new 5G network after it was deemed a national security risk, the successful call for an inquiry into the origins of COVID-19—which the CCP said was allegedly part of the Trump administration’s anti-China campaign, the creation of Foreign Interference Laws—which the communist regime “viewed as targeting China and in the absence of any evidence,” and for speaking out on human rights allegations—which the CCP alleged was the Morrison government peddling lies.

Prime Minister Scott Morrison dismissed the list on Thursday, telling Nine’s Today show that Australia would not be compromising on issues of national importance.

“We won’t be compromising on the fact that we will set what our foreign investment laws are or how we build our 5G telecommunications networks or how we run our systems of protecting against interference,” Morrison said. “We won’t be changing any of that.”

Morrison noted that the Chinese regime’s complaints included reported criticisms of Australia’s free press, saying, “We won’t be changing that in Australia either. So we’ll continue to be ourselves. We will stand up for our national interests, but we’ll engage with our partners respectively.”