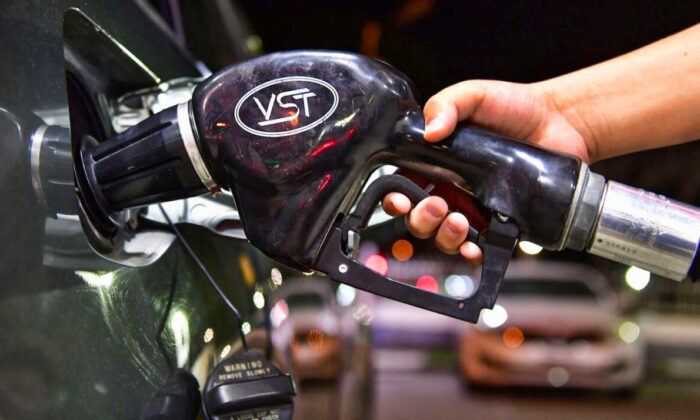 Gas is pumped into a vehicle in Los Angeles on Feb. 23, 2022. (Frederic J. Brown/AFP via Getty Images)
Policies & Impacts

In response to skyrocketing gas prices, five Democratic governors have sent a joint letter to Congress urging lawmakers to approve the Gas Prices Relief Act, which would suspend the federal gas tax for the rest of 2022.

The average cost of a gallon of gas in the United States on March 8 was $4.17 for regular and $4.75 for diesel, according to the American Automobile Association.

To make up the difference, the act would authorize the U.S. Department of Treasury to transfer general fund dollars to the Highway Trust Fund to replace the money that the government wouldn’t be collecting at the pump.

“Like most Americans, Pennsylvanians are grappling with rising gas prices as they navigate paying for other household needs, from their rent or mortgage to groceries and other necessities,” Wolf said in a statement. “A federal gas tax holiday would ease some of that pain on Pennsylvanians’ wallets without impacting important infrastructure projects that are funded through the federal Highway Trust Fund.”

The Epoch Times asked all five governors’ offices on March 8 if they would support eliminating their state gas taxes, but no response was received.

According to the American Petroleum Institute, Pennsylvania’s state tax for regular is 58.7 cents per gallon. It ranks third-highest in the nation, behind California (66.98 cents) and Illinois (59.56 cents). Michigan’s state gas tax is 45.12 cents per gallon; Wisconsin pays 32.90 cents; Colorado pays 22 cents; and New Mexico pays 18.88 cents.

Add the 18.4 cents per gallon in federal taxes to those numbers to get the total tax per gallon.

There has been chatter about doing away with the gas tax before. Pennsylvania currently has proposed legislation for a temporary state gas tax holiday. The push to increase the use of electric vehicles would eventually mean less tax would be collected through gas gallons.

“Ironically, the increased adoption of electric vehicles creates a problem for PennDOT,” Pennsylvania Department of Transportation Secretary Yassmine Gramian said during the Facebook Live event in September 2021. “Pennsylvania is dependent on state and federal gas taxes for 78 percent of its highway and bridge funding.”

In Pennsylvania, Wolf established the Transportation Revenue Options Commission, which issued a July report (pdf) on replacing the gas tax. Ideas included paying a tax by the kilowatt-hour and paying per mile driven.

“While the gas tax that funds Pennsylvania highways and bridges is eroding as a revenue source, the Mileage-Based User Fee (MBUF) approach presents the most promising long-term solution in Pennsylvania and nationally for aligning transportation revenue with the needs of the system. However, a full MBUF solution could be far in the future. In the meantime, we need bold action to meet the system’s improvement and maintenance needs, and to prepare the way for MBUF,” the report reads.

Pennsylvania isn’t alone in having to address these problems, according to the report. An MBUF provides the ultimate replacement for the phasing-out of the gas tax. It leverages technology, which is a great driver of change for all of transportation. It’s a revenue mechanism based directly on the use of the transportation system.

Because it will cost consumers more, it could encourage some carpooling to lower the cost-per-passenger per mile. But the report cautions that there may be a perception of public resistance to the tracking associated with MBUF.