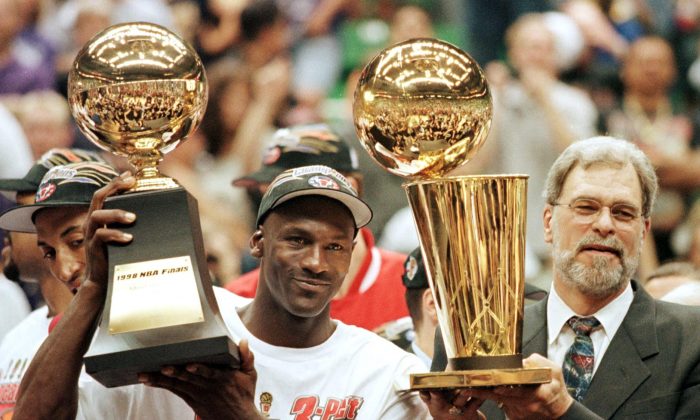 Now that the finals are all set to go, with Miami finally closing against a pesky Indiana squad to take on the Spurs, the question is not only who will win the series, but how exciting will it be?

The finals have brought plenty of boring series (see Lakers versus Nets in 2002) as well as some standout ones that have provided plenty of lasting images. Here are the five best since the playoffs last expanded in 1984:

The franchises entered the series with some history here with Boston having met the Lakers seven previous times for the title—and winning all seven.

Naturally, there were some highlights to this one.

Game 4 featured the infamous Kevin McHale clothesline foul on Kurt Rambis, who was attempting a fast-break layup, that sent him into the horde of photographers. Then Game 5’s “heat game” was played in the non-air conditioned confines of the Boston Garden at an almost unbearable 97 degree heat, causing the need for oxygen.

Larry Bird scored 20 points in the Celtics’ 111–102 Game 7 win in Boston to bring home another title over the Lakers. Bird averaged 27 points and 14 rebounds a game in winning Finals MVP.

4. 2006—Miami (4) over Dallas (2): One of the more controversial series of all-time, this set also saw the rise of Dwayne Wade—and the decline of Shaquille O’Neal—while giving Pat Riley his fifth and final title.

Miami actually dropped the first two games and were trailing 89–76 with 6:34 left in Game 3 before a furious 22–7 game-ending rally by the Heat saved the game and series for Miami. Wade had 12 points in the run and 42 for the game, including 13 of 18 from the line.

After taking Game 4 via blowout, the Dwayne Wade free-throw controversy gained steam in Game 5 as the superstar attempted a whopping 25—hitting 21 of them, including two with 1.9 seconds left via a touch foul.

For the series Wade put up 97 free throw attempts as Miami enjoyed a +52 free throw advantage for the series. Meanwhile former three-time Finals MVP Shaquille O’Neal showed his first signs of aging (he was 34) in averaging a meager 13.7 points per contest.

In the greatest finals performance ever, a flu-ridden Michael Jordan, who needed help just getting to the bench, put up 38 points (including the game-winning three) on the road in Game 5 to put Chicago in the driver’s seat.

Even beyond that, the series was an evenly matched contest between a 69-win Chicago team and a 64-win Utah squad. Three games were decided by less than five points including a Game 1 contest decided by a last-second jumper courtesy of Jordan.

By Game 6, Utah was determined not to let Jordan defeat them with a buzzer-beat and a double-teamed Jordan kindly obliged by finding sharpshooter Steve Kerr for the series-clinching three-pointer.

Karl Malone, who had won the regular season MVP that year had his moments too, including a 37-point performance in Game 3 while averaging 23.8 for the series. But the series belonged to Jordan, who was named Finals MVP while averaging 32.3 points, 7.0 rebounds, and 6.0 assists per game.

2. 1988—LA Lakers (4) over Detroit (3): After the Lakers had beaten Boston for the title the previous year, Lakers’ coach Pat Riley boldly predicted a repeat—it would be a hard-won title though against the “Bad Boys” of Detroit.

The first five games of the series were nothing to write home about as each was decided by 10 or more points. After a 104–94 win in Game 5, Detroit had a 3-2 series advantage as the matchup headed to Los Angeles for the now-classic Games 6 and 7.

A hobbled Isiah Thomas (playing despite a sprained ankle) put the team on his shoulders with a 25-point third-quarter masterpiece in Game 6, that nearly did in the Lakers. Thomas put up 43 for the game but Los Angeles held on in the final minute to force a Game 7.

Game 7 saw an even greater individual performance as Laker forward James Worthy’s triple-double of 36 points, 16 rebounds, and 10 assists sealed a 108–105 win and the first repeat champion since Boston in ’69.

1. 1998—Chicago (4) over Utah (2): The sequel rarely surpasses the original, but in this case the rematch between Chicago and Utah was even more intense than the ’97 series—and it’s ending was the most dramatic yet.

Five of the six games, in this classic feature, were decided by five points or less—and scoring was at a premium, with no team reaching triple digits the entire time. The oddball game of the series was a 96–54 Chicago win in Game 3, with the Jazz setting a futility record for fewest points in the shot-clock era.

Game 1 went to overtime with Utah coming out on top. After three straight Chicago wins to put Utah’s backs against the wall, the Jazz (which had homecourt advantage) prevailed in Game 5, 83–81 to send the series back to Utah for the remainder.

That set up a classic ending in Game 6.

The teams entered the final minute tied at 83 when Utah’s legendary guard John Stockton hit a three with 42 seconds left. After a Chicago timeout, Jordan took the inbounds pass and drove the lane for a quick two points to pull the Bulls to within a point, with 37 ticks left.

On the other end, after a feed in the post to Karl Malone, Jordan (who was just behind him while guarding Jeff Hornacek) came around Malone’s blindside, stripped the ball, and dribbled to the other end, waiting for his moment.

After milking the clock down to five seconds and giving Jazz guard Bryon Russell a little bump, Jordan promptly drilled the game-winning jumper to take the title—his sixth and final one.