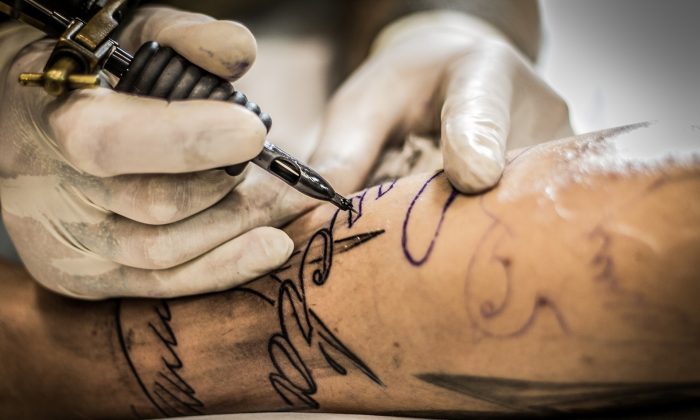 File photo of a tattoo being etched into someone's skin. (Pixabay)
Crime and Incidents

Victims reported being beaten, raped, drugged, and pimped out, according to the report. A 17-year-old female was reportedly tattooed by one of the suspects on her forearm and under her eye.

One of those arrested on March 25 is Darnell Johnson, 26, who faces two counts of tattooing a minor and one count of “contributing to the delinquency of minors.”

Johnson also faces accusations of possessing an illegal firearm. He has a prior conviction for domestic battery.

Two other men identified as Jayson Figueroa and Cordarrell Rudolph have also been arrested, Fox reported. They face charges of trafficking children for sexual purposes, second-degree rape, and felony carnal knowledge of a juvenile.

A fourth man, Kortlen Hubbard, was also arrested after confessing to having had sexual relations with a 16-year-old girl.

Police rescued a 16-year-old sex trafficking victim from a New Orleans hotel in February, The Times-Picayune reported.   A 17-year-old girl was also rescued in the sting.

Johnson allegedly tattooed her forearm and face with the word “numb.”

She has also been charged with trafficking children for sexual purposes after allegedly recruiting the 16-year-old into.

Politicians, law enforcement professionals, and community leaders from Louisiana and Texas are collaborating to fight the scourge of human sex trafficking.

They met at a summit in Lake Charles to explore ways to crack down on the crime and help victims, KPLC reported.

State Sen. Ronnie Johns (R-La.) was one of those in attendance.

“The real deterrent is going to be public embarrassment. To know that my picture—my name is out there in the community as being involved in sex trafficking. You can imagine the embarrassment for the owner of the New England Patriots; incredible embarrassment for he and his family,” Johns said.

Calcasieu District Attorney John DeRosier said some of the victims come from south of the border between the United States and Mexico.

“Human traffickers are bringing these young girls and young boys into the United States for that purpose,” DeRosier said, KPLC reported. “Many of these young people do not know why they are coming over here, but they are being trafficked—but they are being groomed and set up to be commercial sex objects. That is happening along our southern border.”

DeRosier said one of the ways to fight sex trafficking is by naming and shaming johns.

“They will not want anyone who knows them to know what they have been doing. It will embarrass them, and it will shame them. Number two, it sends a message to anybody else who is doing this who has not yet been caught. We’re going to get you,” DeRosier said.

DeRosier said another summit is expected in September.