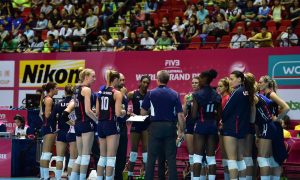 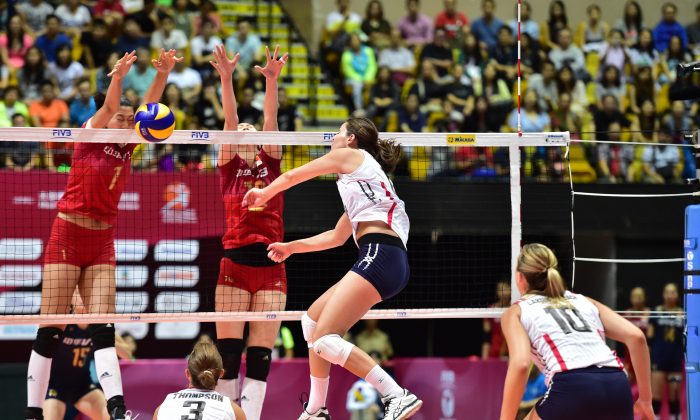 The final round of the women’s FIVB World Volleyball Grand Prix 2015, the Volleyball Federation’s premier annual competition is currently being played in Omaha, Nebraska, USA between July 22 and July 26 with six teams: Brazil, China, USA, Italy, Russia and Japan taking part. This follows a preliminary round completed in 3-rounds over the previous three weekends at various venues around the world.

Matches are “best of 5 sets’ and the scoring system is 3-points for 3/0 and 3/1 wins but if the final result is 3/2 the winner gets 2-points and the loser gets 1-point. Teams on the same number of points are separated based on the ratio of sets won divided by sets lost and if still level, then on points won to points lost.

The highlight match of Pool H played at the Coliseum in Hong Kong was the match between China and USA, played on Saturday July 18. Both teams had won all of their matches to that point and were lying 2nd and 3rd respectively to Brazil in the preliminary competition. Although USA took the first set 25-23, China responded by winning the second set 25-13, and the 3rd set 25-22. USA hit back taking the 4th set 25-19 to push the match into a 15-point deciding 5th set which China won 15-12.

China showed impressive capability in front of a highly supportive packed stadium. China with height and reach advantage over their opponents, their Blocking was more successful and USA was hard pressed to get the ball past them.

With Spike attacks, China hit the ball from great height at steep angles increasing the difficulty to dig out the ball. It will be interesting to see the result of their match in the Final Round in Omaha.

Defending Champions Brazil did not play either China or USA in the preliminary competition.

From the results of the preliminary competition, the final ranking shows the three top teams to be Brazil, who won all of their matches 3-0 and finished with 27-points to reach the final, China was in second place having won all their matches to make 26-points (5 matches 3-0, three matches 3-1 and one match against USA 3-2) and USA (24-points) won 8 matches but lost to the China team in 5-sets.

Important 6th place
There was a close contest for the important 6th place with the results of the final Pool matches played between Japan and Thailand, and Serbia against Germany being crucial.

Before these matches Serbia was in 6th place (12-points), Japan was 7th (10-points) and Germany 8th (10-points). Germany beat Serbia 3-1 to gain 3-points, and Japan beat Thailand 3-0 to also take 3-points. That put Japan and Germany both on 13-points, one point ahead of Serbia. But Japan had a better Set Win Ratio than Germany so took the 6th place.