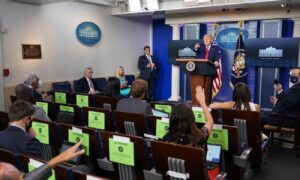 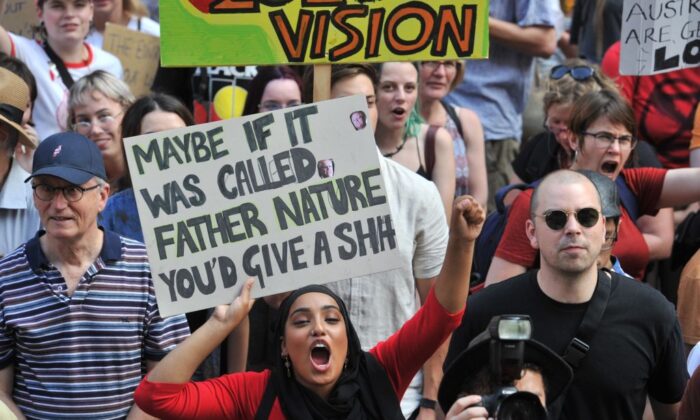 Participants hold placards as they take part in a demonstration demanding the government take immediate action against climate change in Sydney, Australia, on Jan. 10, 2020. (Mohammed Farooq/AFP via Getty Images)
Viewpoints

The decision by Joel Fitzgibbon, federal member of Parliament for Hunter, to retire at the next election means the Australian Labor Party (ALP) will lose one of the very few MP’s who have dirtied their hands in manual work for any extensive period. Fitzgibbon was an automotive electrician for 12 years, a real worker in traditional Labor terms.

When it is recalled that the Labor Party rose from the unions and was established to represent the interests of the working class, principally manual workers, this is indeed ironic.

At the same time the unions, once the source of ALP support, are losing members. In 1992, 40 percent of the Australian workforce was unionised. Now it is 14 percent, comprised mostly of public servants, teachers, and health workers.

The only way to judge what a party stands for is through the policies it advances and what it actually does in office.

This change in Labor was recounted scathingly by the father of former ALP leader and now Governor of Western Australia Kim Beazley. Beazley Sr. famously said, “When I joined the Labor Party it contained the cream of the working-class; now it contains the dregs of the middle-class.”

These days, it is in coal-mining electorates like Hunter, north of Sydney, that the ALP struggles with its newfound allegiances. This was brought home to Fitzgibbon at the last election. Labor’s unqualified endorsement of the Paris Accord solution to the claimed effects of man-made global warming, or as it is now described, climate change, seriously undermined their hold on what had long been a blue ribbon Labor seat.

The coal mining industry is a particular target of global warming believers, a favourite among inner-city voters.

On this, Australia has recently been visited by United Nations’ Assistant Secretary-General Selwyn Hart, who called for wealthy nations to stop using coal by 2030 and the rest of the world by 2040. Hart also pushed Australia to close down its coal mining industry.

The fact is the world is not about to stop using coal. If Australia were to close down its coal industry, our principal customers, the People’s Republic of China and India, would find coal elsewhere.

But it would most likely not be of the high-quality Australian coal is. The likely alternatives are of a lower quality, both polluting and producing more CO2.

Hence, the only result of our obeying U.N. instructions would therefore be to increase global warming.

To return to Fitzgibbon, he has held his seat since 1996, when he succeeded his father. But in the last federal election, Labor’s accommodation of policies to address global warming came home to roost.

Fitzgibbon, seen as representing Labor’s policy, suffered a 15 percent drop in his primary vote which was exceeded by the combined total of the competing National and One Nation party votes.

Only preferential voting saved him, with a two-party preferred vote (after preference votes were distributed) which saw the ALP receive 52.98 percent, compared to 47.025 percent for the Nationals. This was a fall of 9.48 percent for the ALP from the last election in 2016.

The writing was on the wall.

Since that election, Fitzgibbon has campaigned tirelessly for Labor, not to deny climate change, but to adopt a far more gentle approach to its solution.

In effect, he wanted Labor to do what politicians are often accused of doing, to walk both sides of the street.

At the least, he wanted to ensure that Labor went no further than the Coalition in taking action against global warming.

Fitzgibbon tried to introduce a degree of realism without driving Labor’s elites into the arms of the far left-leaning Australian Greens party.

The fact remains, however, that Hunter is a coal mining electorate and Labor will have difficulties retaining the seat.

Labor is struggling to deal with the fact that it is no longer the party of the workers.

In fact, Labor was instrumental in encouraging the winding up of Australian manufacturing. No one endorsed free trade more than Labor under former Prime Ministers Gough Whitlam, Bob Hawke, and Paul Keating.

They did this in an academically purist way, dismantling protection unilaterally rather than waiting to agree to concessions in free trade negotiations. The Coalition followed suit.

That is why when free trade negotiations began with Beijing, only the Chinese Communist Party (CCP) could offer significant tariff reductions.

Australia was therefore pressed to make concessions on so-called “investments”—that is the acquisition of premium and even strategic assets at bargain basement prices.

Such is the naïveté of the Australian political class.

While we are on Labor’s struggles there is one phase over which they should be very embarrassed.

Before Australia’s Federation in 1901, the self-governing colonies had little control over immigration. This was more a matter for the Empire and on which the British were very liberal.

With Federation, it was possible to adopt an Australian immigration policy. Of all the parties, Labor was the most opposed, probably because it feared workforce achievements would be undermined.

Rather than hiding behind the device whereby prospective immigrants could be required to pass a dictation test in any European language, Labor pushed for a policy which was blatantly called the White Australia Policy.

The ALP was the firmest in its application immediately following the war, but the policy was effectively dismantled by the Harold Holt Coalition government, although the Whitlam Labor government is usually given the credit by the media for its end.

It is not unknown for a party to hide its past and even to profit from this.

The U.S. Democrats were the party that supported slavery and then segregation. But ironically are now the party most supported by the African American community.

The ALP has the most storied history when it comes to race policy, yet, the latest Newspoll survey reveals that households where a foreign language is normally spoken are more likely to vote Labor 58 to 42.

It is one thing to cover up the past. It is more difficult to hide the present.

Voters are entitled to consistency, but above all that a party will act in what it genuinely believes is in the national interest and that it will openly discuss this.

Albanese may well think that Fitzgibbon’s departure will take the heat off him, but the fact is, the heat will come from traditional Labor voters as we saw in 2019.