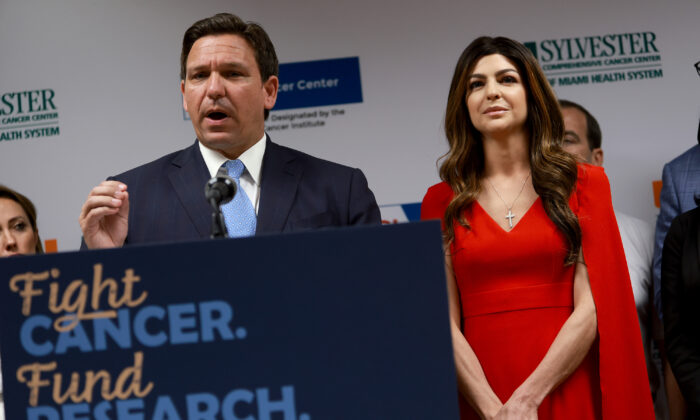 PUNTA GORDA, Fla.–Florida’s First Lady Casey DeSantis, declaring herself “fit to fight,” rolled out an initiative to encourage veterans and former law enforcement officers to sign up to work as child protective investigators.

“I’m feeling good, and I’m here,” she told the crowd at Eglin Air Force Base in Pensacola on June 22. “I’m fit to fight, and that’s a lot due to your encouragement.”

Her initiative—”Continue the Mission”—is in line with the child mental health and resiliency issues that have been the focus of her duties as governor’s wife. It is a program where veterans, former law enforcement officers and military spouses are encouraged to train as Child Protective Investigators (CPI) under the Department of Children and Families.

The job, which requires investigating child abuse and neglect cases, is a high-stress, emotional job that sees a high turnover, she explained.

Also, in conversations with veterans across the state, the first lady said that some feel they have “lost their purpose.”

“They have been spending their entire life … doing something greater than themselves, and then they come back and some of them feel they have lost their purpose in life.”

“Our veterans, military spouses and former law enforcement officers are a group of men and women who have dedicated their lives to serving our country and keeping our communities safe,” Casey DeSantis said. “I am excited there is a new pathway for these heroes to ‘Continue the Mission’ through rewarding career and mentorship opportunities protecting Florida’s children. We are not only helping children across the state but also helping veterans and retired law enforcement.”

The new program is a collaborative effort between the DCF and Florida’s Disabled Veterans Association as well as local veterans’ organizations and other community groups across the state.  They will be charged with the task of actively recruiting veterans, military spouses, and former law enforcement officers to become CPI’s. A mentoring program as well as case managers will be some of the other opportunities available.

The state’s first lady has increased her public appearances over the last five weeks after taking a break while undergoing chemotherapy treatments for breast cancer.

Gov. Ron DeSantis first announced publicly that his wife had been diagnosed with breast cancer in October 2021, and in March 2022 declared that she was “cancer-free.”

At the Pensacola event, the first lady thanked people who had written her letters of encouragement and prayed for her recovery.

“I want you all to know that it didn’t go unnoticed,” she said.

Before becoming Florida’s first lady, Casey DeSantis, 41, worked for two Jacksonville television stations and was a producer and on-air host for the PGA Tour.

Returning to the campaign trail last month, she took time to say a few words about the governor, who is actively campaigning to serve the state for four more years.

“I kick a good guy out the door every day … I couldn’t be more proud of everything he has done.”