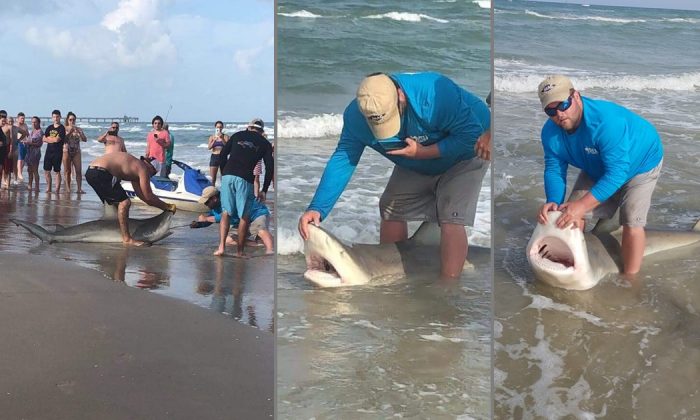 A Texan fishing enthusiast caught a large shark armed with just a fishing rod at a popular Gulf Coast beach on July 7.

The man from Pleasanton described the 30-minute tug of war with the 7-foot 7-inch marine predator as being a bit like heavy weightlifting.

“It was really heavy,” he told the San Antonio Express-News.

Jenkins uploaded a video of the moment he caught the shark, showing two others helping him lift the creature’s tail, drag it out of the water, and onto the sand.

The shark struggles and jerks left and right for several seconds before it becomes tired and lets Jenkins move it into position for a photo without a fight.

“Oh my God,” the person filming the catch can be heard saying on the video.

Jenkins admitted that he had caught sharks before but never reeled in a bull shark that weighed 300 pounds, according to the San Antonio Express-News.

After taking a few photos of him standing over the shark and holding its jaw open above the water, Jenkins dragged the shark back into the water and safely released it back into Gulf of Mexico waters.

The spectacle attracted a large crowd of spectators who can be heard on the video laughing in delight when the shark returns to the water and swims away.

“Three stations [reported on it], two in Corpus too,” he said on Facebook.

He is already planning his next fishing adventure with fellow fishing enthusiast Marteen Guardiola.

“Man, I’m thinking about going out on Monday,” Guardiola said on Facebook. “Time to convince the wife.”