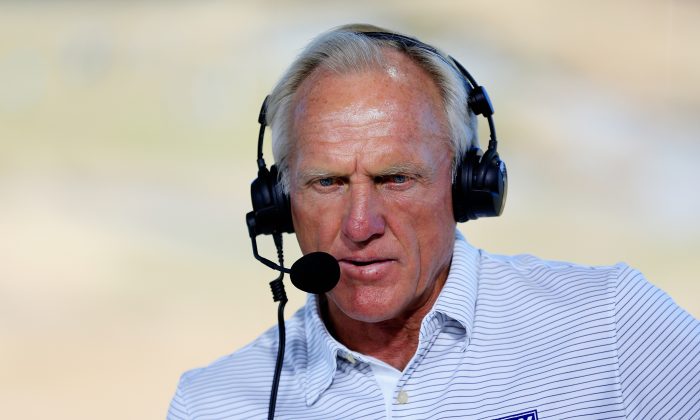 Greg Norman, former Fox TV Analyst, is seen on set during rehearsal prior to the start of the 115th U.S. Open Championship at Chambers Bay on June 17, 2015 in University Place, Washington. (David Cannon/Getty Images)
Golf

Fish Out of Water: The Shark Sinks

New York, NY—It seemed only like yesterday when Fox Sports and the United States Golf Association (USGA), to much fanfare and hoopla, announced the new “face” of golf broadcasting with the network’s entry into coverage of various national championships conducted by the USGA—the most notable being the U.S. Open. The 12-year deal with FOX, a reported $1 billion, certainly signaled a major shift for the Far Hills, NJ-based golf association.

It was at the famed Waldorf Astoria in February 2015, during the USGA’s annual meeting, when the rollout of the new television partnership was unveiled with great excitement—and a bit of bravado—that FOX would go beyond what previous USGA television partners  ABC-Sports and NBC-Sports had shown.

In slightly less than a year — reality of, a different kind has now hit home—this time with lead analyst Greg Norman, known to many as “The Great White Shark”—has been shelved from his role. In simple parlance Norman, a former world number one player and winner of two major championships, was ill-suited for what such a prominent role requires.

The coverage of the 2015 U.S. Open at Chambers Bay—just outside of Seattle—was uniformly panned by a wide array of observers and rightly so. FOX inserted their main baseball and football voice—Joe Buck—into the lead role and far too often Buck was lost in terms of being able to adpat to a golf stage which requires a far different persona as others, such as Jim Nantz at CBS and Dan Hicks at NBC, have routinely done for quite some time. As ill-suited as Buck was, FOX wanted to insert Holly Sonders, a day time host hired from The Golf Channel—celebrated for her collegiate golf skill and more noted eye-candy appeal—to serve as post-round interviewer. Just a small issue happened. Ms. Sonders flubbed badly in being able to put together questions of a meaningful sort. Since that inauspicious start, Ms. Sonders has been jettisoned out from golf to other sports covered by FOX.

But, the real anchor to hit water was the announcement this past weekend that Norman would be vacating the lead analyst role. The Aussie who lives full-time in America was hailed in his rollout at the USGA annual meeting in ’15. The Shark was touted as the new voice—the man best able to provide the overview during the telecast given his prominent standing in the game as a top tier player for many years. The sad reality is that Greg was ill-prepared for the role. During key moments of the ’15 U.S. Open he failed to add anything of depth or meaning, often with long periods of silence and when eventually speaking only doing so in reaction to what others were saying. In short, the man who was hailed initially as a new voice had developed self-inflicted bouts of stage fright and allowed key moment after key moment to simply go unnoticed. Often when Norman did speak his contributions were fairly pedestrian in scope and limited in his overall golf knowledge of the different players—save those from his native land of Australia.

For golfers long accustomed to the frank and ever-involved former lead analyst for NBC-Sports Johnny Miller, the differences were the equivalent of day and night.

Lost in all the personality shuffling, is the USGA’s desire to make sure the growing pains from Chambers Bay is not repeated with this year’s event at Oakmont CC—which is hosting a record 9th event and clearly one of the most celebrated iconic clubs in America. The Pittsburgh-area club is awash with significant golf history and given the surge in new players coming onto the scene it will take a person with real acumen and savvy to handle the vacuum the Norman exit has caused.

There’s been major speculation that long time analyst Paul Azinger, will switch from his existing assignment with ESPN and head to FOX. Azinger has clearly demonstrated a clear connection to serious golf fans and his background as a former PGA Tour star and major champion, along with being the last successful American Ryder Cup Captain, will bode well for him.

Nonetheless, it is hard to say with any certainty what FOX will do. No doubt the USGA will need to give its blessing because the new television contract with FOX runs through ’26 and the folks at Golf House will want to make sure whoever is selected will demonstrate not only staying power but real credibility on all fronts.

For Norman, the ascension to the analyst chair could have been the ultimate stepping stone to extend his name and Shark brand. For someone with plenty of business “irons in the fire,” the Shark benefited from having to only be available for several USGA events—a far smaller calendar than what major networks such as CBS and NBC do with televised golf. Most of all, being in the catbird seat for the U.S. Open gave Greg the ultimate event—save for The Open—all to himself.

Like any crisis communications situation, FOX and the USGA will need to turn the storyline from being mindlessly clumsy to artfully savvy. No small feat for sure. An expected replacement name would mark a clear break from the past and focus more on the future. The Shark has indeed shown no fins to swim—the next fish that’s announced had best show the dexterity to handle the choppy waters or risk being served as the next catch of the day.